"[The procedure is] very new and involves repairing my leaky valve using a clip device, without open heart surgery, so that my heart will function better"

Percutaneous mitral valve repair will be the talk of the ACC Scientific Sessions for interventional cardiology this year, especially since coronary artery stent procedures are so, well, yesterday.

One valve repair technology popularized by Ms. Taylor's tweet that corrects a leaky mitral valve will be presented Sunday morning at the ACC meeting in Atlanta when the EVEREST II trial results are released (Larry Husten over at Cardiobrief.org has a nice outline of the late-breaking clinical trial schedule).

The EVEREST II trial is a phase 3 trial that compares the percutaneous mitral valve repair head-to-head with more conventional open mitral-valve surgery. The trial is sponsored by E-valve, Inc. (bought a year ago by Abbott). Since our center has participated in the trial (note to SEC: I have no clue about the results), it might be interesting to review the background and provide a few pictures on the technology. (By the way, this was NOT Elizabeth Taylor's procedure!)

(Important disclaimer: This device is NOT YET APPROVED for use in the US. Further, I have no financial interest in the manufacturer(s) and was not an investigator for the EVEREST I or EVEREST II trials, but I do work at one of the trial centers).

In 1998, a report of correcting mitral valve insifficiency (leakage) was reported by Ottavio Alfieri and colleagues in the European Journal of Cardiovascular Surgery describing a technique to plicate (suture together) the mid-portion of the mitral valve, effectively creating a "bowtie" orifice to correct the leakage:

The experimental technique reported in this study could permit minimally invasive correction of the mitral insufficiency. These patients are often not referred for surgical repair, because they are believed “too sick” for conventional surgery. The experimental technology described in this report would avoid cardiopulmonary bypass and its consequences, and thus represents a more palatable alternative for these patients.

The long-term results of this technique were favorable and lead to the development of a minimally-invasive (yet transthoracic) approach for this same repair and later, thanks to the wonders of clever engineers, a completely percutaneous approach using a clip instead of sutures.

(Note: Thanks to Dr. Ted Feldman for use of these great pictures) and the clinical trial nurses who make this all possible.

While minimally invasive, this procedure takes a village, so to speak, to perform: the interventional cardiologists, an echocardiographer and a well-hidden anesthesiologist (can you say "Where's Waldo?") barely seen behind the plastic drapes above the patient's head (yes, the patient gets to sleep for the procedure): 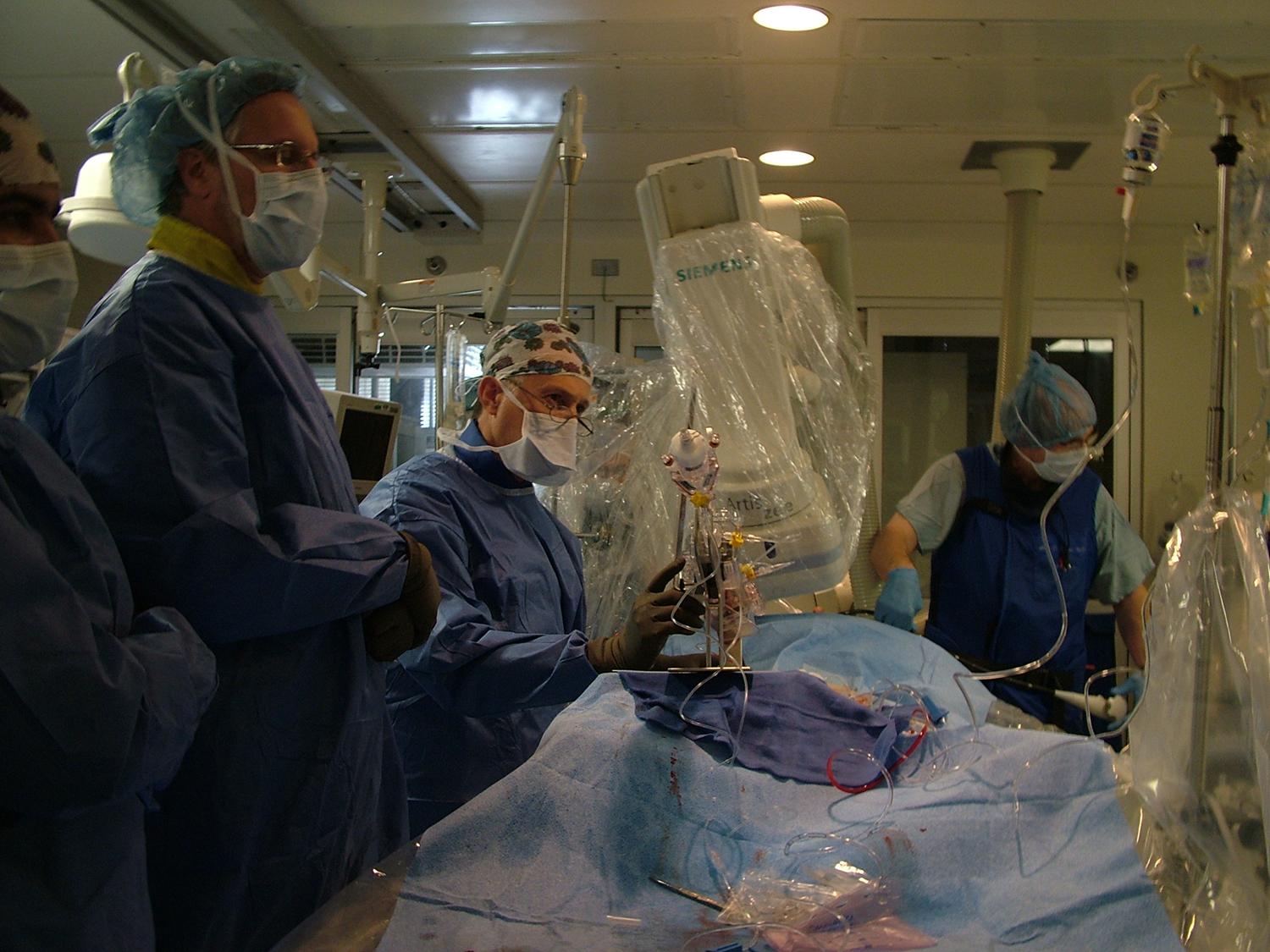 The personnel and equipment required to perform percutaneous repair of the mitral valve as viewed from the patient's feet. Note the Frankenstein-like steering-and-release contraption with all the IV tubing coming from it in front of the doctors used to place the mitral clip.
(Click image to enlarge) 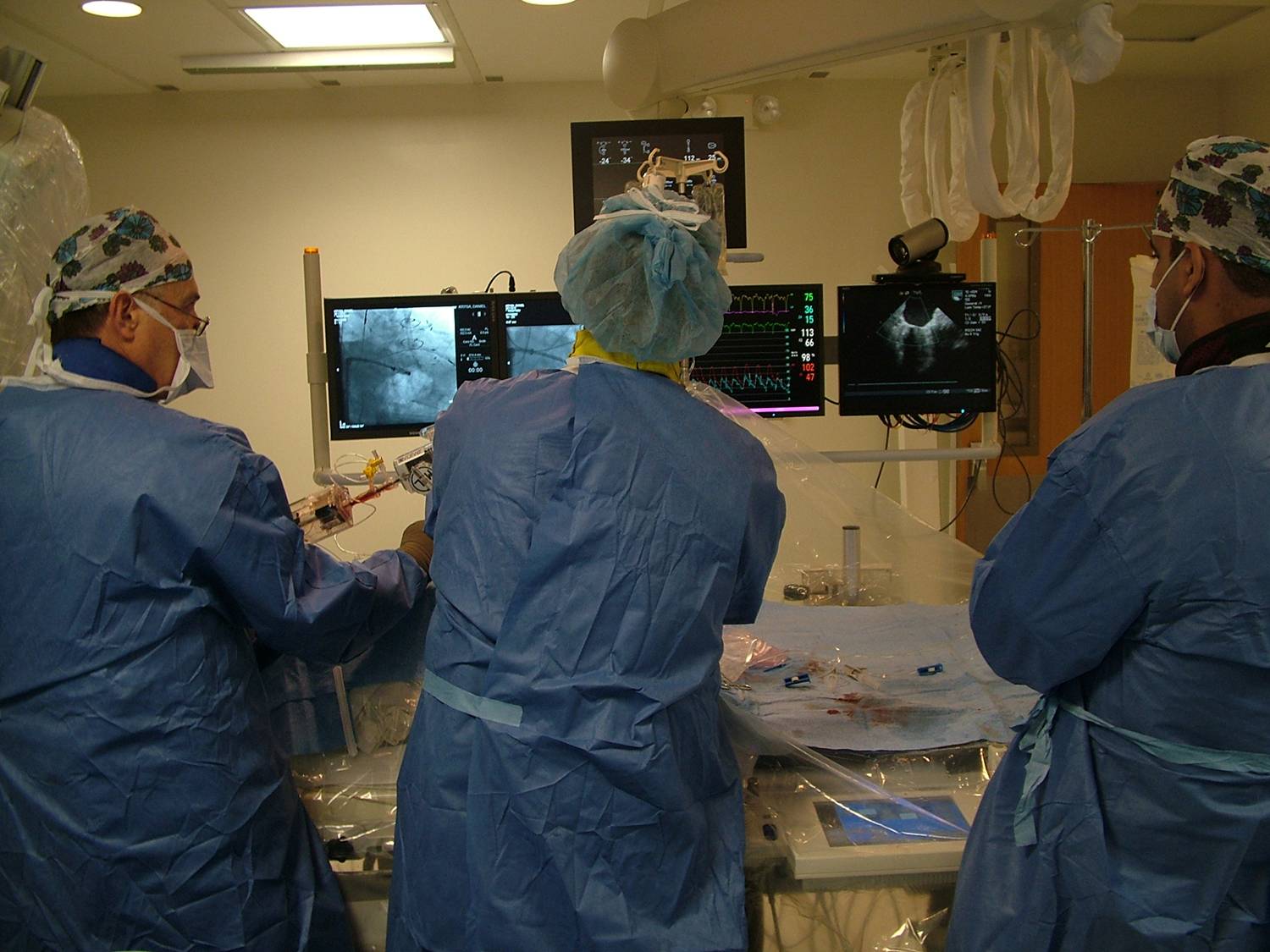 A view from behind the implanting physicians. Note that all eyes are on the echocardiographic images to the right as the clip is positioned, rather than the fluroscopic images immedicately in front of the operators.
(Click image to enlarge)

The back end of the catheter delivery system looks just a bit complicated, since it steers the clip, grasps each leaflet of the mitral valve, and releases the clip when seated properly:

The business end of the device is a small mechanical clip that grasps the center of the posterior and anterior leaflets of the mitral valve in an attempt to replicate the "bowtie" surgical repair originally described: 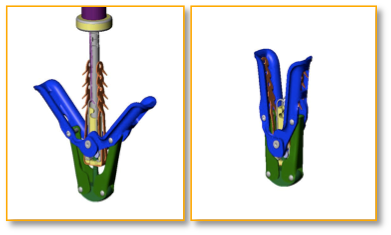 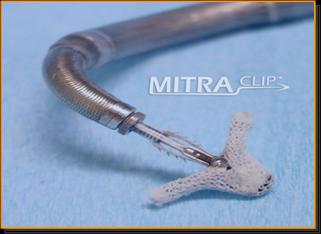 While the fluoro images of the procedure are interesting to view as the device is deployed: 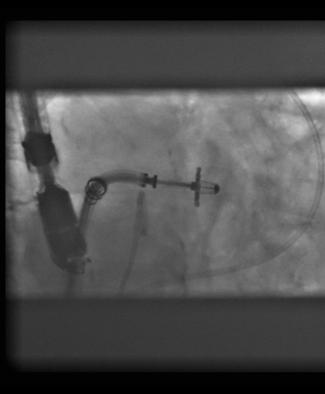 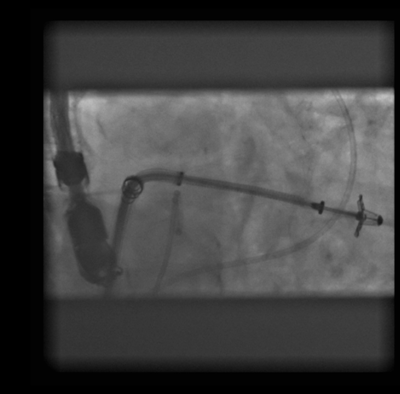 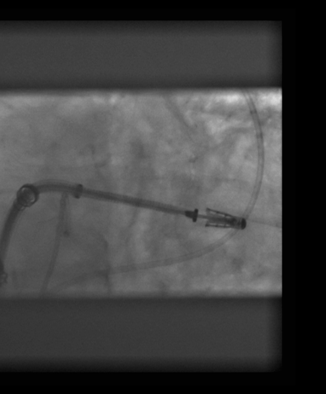 The valve leaflets are grasped and the side "wings" of the clip closed. 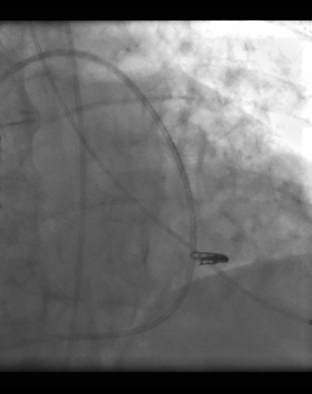 The clip is deployed and fixes permanently to the mitral valve leaflets.

Although these fluoroscopic images are amazing, this procedure would not be possible without the ability to see the valve leaflets in realtime using transesophageal echocardiography: 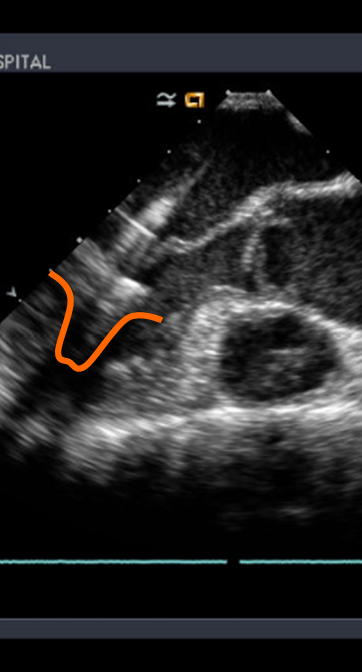 Transesophageal echocardiographic images of the clip (outlined in orange) being placed below the mitral valve leaflets. 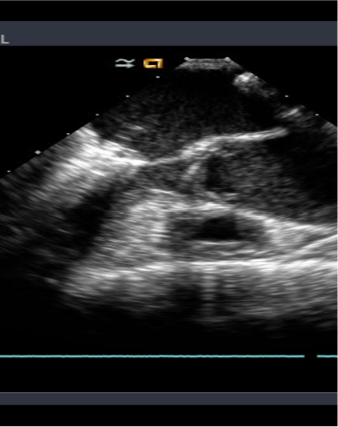 The clip is withdrawn until the leaflets of the mitral valve are engaged in the clip. (Note the "wings" of the clip are still open) 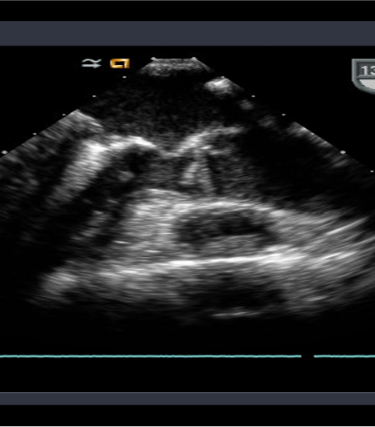 The wings of the clip are closed tightly to grasp the valve leaflets.

Will the Device Work?

Although preliminary results of the EVEREST I trial were promising, the EVEREST II trial will be the pivotal comparative effectiveness study comparing this approach to open mitral valve repair.

One thing's for sure after seeing all this: innovation in cardiology is alive and well!

Dr. Wes -
I have a patient who is a good candidate for the mitral clip. He does, however, have some calcifcation......would this really prevent him from getting the procedure? If open heart is not an option then what alternatives are left for his CHF and mitral valve?
Thank You!!!

The mobility, thickness and amount of mitral leafets available for clipping weigh on the decision for clipping. I would defer to one of the investigators on the trial for more specifics. Please contact me via e-mail at wes - at - medtees - dot - com to discuss offline since a blog is not a good place to discuss patient care.