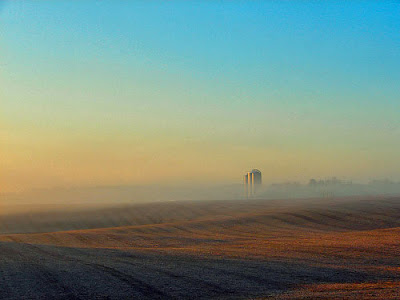 Driving in the Midwest, one cannot help but be impressed at the vast expanses of seemingly endless terrain on the prairie where heaven and earth meet without a tree or a structure separating them. You can drive for miles and look with wonder at the emptiness of it all - a strange beauty all its own. Only occasionally, the scene is interrupted by silos - tall, monolithic structures that stretch perpendicular to the horizon as they punch through the sight line to touch the clouds. Beautiful in their own right, they help interrupt the monotony of the drive but are only seen rarely, making their presence all the more appreciated.

The silos house grain that has been carefully gathered by the farmers and stored to later sell at market or to feed the livestock, especially in leaner times. Not only do they house the grain, they also permit it time to dry properly for later sale on the commodities market. Silos serve as an invaluable resource to farmers and cost them a hefty investment to install.

Eventually, though, the grain must leave the silo on its way to the commodities markets or to the cattle to ready them for the next batch of grain. The strategically-placed silos efficiently fill the train cars or trucks parked before them. In good times, the farmer can make a hefty profit from his grain and reinvest it into more fields and building another silo, usually near the last. If the farmer works hard and remains profitable, a cluster of silos eventually appears. Through such acquisitions the farmer's profits grow. Eventually, however, the farmer's land expands to touch a neighboring farm with its own shining silos.

To continue to grow, competition for land becomes paramount to survival for grain is the commodity that generates the capital required for growth. Either one farmer must buy the land of his competitor or a large fence must be erected between properties as each farmer weighs his options.

But what if a cow on one side of the fence closest to the competing farm wanted some of the grain from the silo of a neighboring farm? Could he get it?

Not easily. The silos have come too valuable to each farmer as they raise their separate herd of cows. Sprinkling grain across the fence would place one farmer at a distinct disadvantage over the other. But the reason the competing cows are told they cannot get the grain? Because the grain's privacy might be compromised and if it touched the ground it might not be safe to eat.

And so, the competing cows are left to create their own new grain to be grown on their own side of the fence.

And so it is with our current iteration of developing electronic medical records: huge information silos of vital information hoarded by the farmers and never simply shared with neighboring cows.

Good analogy Wes. One wonders when we will move to the next stage of having medical records shared in a data base accessible and added to by all providers. This is when improvements and eoonomies will be realized from medical records.

Then HIT folks can create products designed for specific specialties which will work more efficiently for that specialty rather than these giant all inclusive EMRs that are designed for big integrated health care providers who are the only ones who can afford them. They will likely cost much less as well.

You have so eloquently given a voice to the frustration that I have had over the last five years of trying to navigate medical care with multiple co-morbidities.