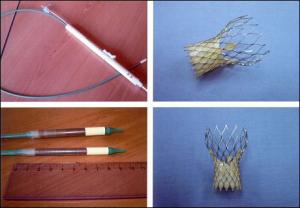 As reported from TheHeart.org:

Percutaneous implantation of the self-expanding CoreValve aortic valve bioprosthesis in the first-ever series of patients shows that the procedure is feasible in those deemed too high risk for valve surgery and, when successful, results in marked hemodynamic and clinical improvement at 30 days [1].

However, there was a high periprocedural mortality of 20%, and there are several important lessons to be learned from this first-in-human single-center study, say the researchers, led by Dr Eberhard Grube (HELIOS Heart Center, Siegburg, Germany). They report their findings in the October 10, 2006 issue of Circulation.


It's too early to know if this self-expanding design will supplant or complement the balloon-delivered aortic valve replacement called the Edwards Life Sciences Aortic PHV device but it is a courageous start.

I saw a presentation at ACC in March with similar data (guess it was the same researchers as this is presented as the first series of pts, don't recall the specifics). Inclusion criteria basically were those who would never be considered for AVR surgically (ie, comorbid conditions, advanced age). So, if they can improve technology as time goes on, then this may be a true option for those who had no options for their AS.