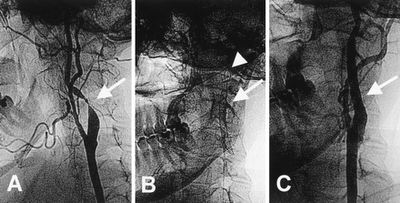 Today's New York Times discussed the carotid stenting debate going on over at the TCT. Seems doctors are dissin' the French study from the New England Journal of Medicine last week demonstrating superiority of surgical endarterectomy over carotid stenting.

“No one wants a scar on their neck when they can have a Band-Aid on their groin,” said L. Nelson Hopkins, a professor of neurosurgery and radiology at the State University at Buffalo School of Medicine. ...

The more worrisome report was published last week in the New England Journal of Medicine, which told of a trial in France halted even before it finished enrolling patients after data on the first 527 showed that 9.6 percent of them had died or suffered strokes within 30 days compared to just 3.9 percent of those who underwent surgery.

Doctors here said that both studies had numerous shortcomings that made the results unreliable. The drawbacks, they said, included failure in many of the stenting cases for physicians to use a protective filter that is required in all American procedures and is designed to catch bits of life-threatening plaque knocked loose during the procedure.

But a closer look at the French study demonstrates the issue of distal protection devices (little umbrellas that catch debris as seen in Panel B (small arrow) above) was reviewed, and it was decided to stop the study anyway:

Where it might be nicer to have a bandaid on your groin than a scar on your neck, if the risk of stroke is indeed higher with carotid stenting, then I'd rather be able to walk with a scar on my neck, than be paralyzed with a bandaid on my groin.

We'd better go slowly here and make sure marketing pressures don't cloud our judgement - even IF the stenting market is likely to be a $1 billion market, as the article suggests.