Purell and the Power of Marketing 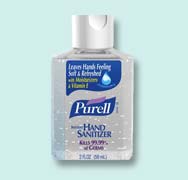 In 1997, Purell was introduced to the marketplace and has swept the world with its claims of removing "99.9% of bacteria" from surfaces. Even politicians, it seems,are now getting into the act, using a spritz of the goo to clean their hands after shaking the hands of their constituents.

But what are the data here? You know, the REAL data. Is this goo as good as it's advertized? I decided to spend a minute looking for some data and review of what others have found. It's pretty interesting.

Take for instance, that most of the "99.9% bacterial free" studies were done on inanimate surfaces, not human hands. In fact, in one study, the number of bacterial colonies on neonatal nurses' hands after using the stuff was found to be "3.11 x log10" and was no different (statistically) than plain hand washing ("3.21 x log10"). Whoa there. Let's write out the numbers of bacteria on those alcohol gel hands:

31,100,000,000 colonies of bacteria were STILL THERE after the use of alcohol-based goo! Hardly sterile. No wonder I never use this stuff before surgery. But obsessive compulsives can rejoice! No need to rid yourself of your hand-washing compulsion, there's still tons of bacteria left over that NEED your attention!

And even the FDA has questioned the claims of "antibacterial" products as well:

In the documents released yesterday, the FDA said it found no medical studies that showed a link between a specific consumer antibacterial product and a decline in infection rates. Indeed, one major study found little difference between washing with soap and using an antimicrobial product. However, the agency said that the data about links to resistant strains of bacteria are "conflicting and unclear." The worries raised by researchers center largely on triclosan, an ingredient in a number of antibacterial products.

But Purell and its congeners are less irritating to our skin compared to repetitive handwashing, so health care providers might be more apt to use it. Fair enough.

The issues of what we're doing to our immune systems is now coming into question, especially with the high prevalence of asthma in kids these days. We have known about "super bugs" like methicillin-resistant staph. aureus, or c. difficile. One wonders if we're selecting out these critters using antimicrobial products and alcohol-based gels. This piece from Salon.com does a nice job on presenting the drawbacks that might be inherent to using all these products.

Some bacteria are good for us. They are part of what makes us tick. Take, for instance, folks taking the blood thinner, warfarin (Coumadin(R)). Warfarin blocks the production of Vitamin K which is integral to allowing our blood to clot. Vitamin K has several sources: some is produced in the liver, some exists in our diet, and some is produced by bacteria in our gut. Antibiotics administered to people on warfarin can kill many of the gut bacteria that make Vitamin K, causing the person's blood to become "too thin" if the dose of warfarin is not adjusted accordingly. So in this case, bacteria can be helpful to us, provided we do not disturb nature's careful homeostasis.

Maybe these politicians using this stuff should clean up their acts before cleaning their hands. Our health care system would be a great place to start.

My understanding was that bacterial resistance may be developing to chemicals/antibacterial agents in soaps and other household products, but not to EtOH, am I wrong?

Graham-
As far as I know, you are correct. However, I also believe there have been no long-term studies evaluating the effects of alcohol based "selectivity" of organisms and the effects of selecting a subset of bacteria that might be resistant to the alcohol. Remember, some bacteria might need a longer "dwell time" in alcohol to effectively kill them - the 10-20 seconds of drying of Purell might not be enough to effectively eradicate some strains and potentially cause a selection of more hearty forms of bacteria resistant to alcohol in the future.

C. Diff is not killed by the EtOH based hand rubs.

I have my doubts about Avagard. Personally don't like using it when scrubbing in the cath lab, but it is the routine where I work.

I haven't read any evidence linking ETOH hand rubs to drug-resistant bacteria, and to the contrary, the Sep 2005 Pediatrics article shows a decrease in gastroenteritis spread.

I looked at your article. Interesting, but it's not surprising to see rubs won out:

Why weren't the control families taught about plain ol' hand washing? Certainly, as the authors conclude, "multifactorial hand-hygiene intervention that included educational outreach, reminders, and a free supply of alcohol-based sanitizer can reduce transmission of GI illness in the homes of families with children in out-of-home child care." But the effect of alcohol-based scrubs ALONE, given the MULTIPLE SIMULTANEOUS inerventions, can not be teased out from this study.

And who, really, is going to go to these extremes at preventing spread of germs when kids return from day-care? I think this work was performed to support daycare, rather than to support the effectiveness of alcohol-based hand sanitizers....

Well, I'm just an ordinary non-medical professional. What I got out of this thread is those hand sanitizers is about as good as washing hands with soap/water. So when no soap/water available, they're a good alternative. What's bad about that?

Your comments are disrespectful to those with obsessive-compulsive disorder. It's not a joke.

Dr.-
You're right, but you fail to talk about the actual importance of these sanatizers only killin 99.9%. It's not so important that they leave bacteria on your hands- it's the kind of bacteria that's left, the resistant kind, that now has more natural resources to allow it to reproduce and make up 100% baceteria on your hand. This isn't so bad either, becuse most of the bacteria on your hands during the day are harmless. But what if a random mutation happens in one of the plasmids on the bacteria? What if the mutation makes it pathogenic? Mutations are likely in bacteria, seeing as how fast they reproduce. This is where the real problem lies with hand sanatizers: you turn a bunch of pretty much harmless bacteria into resistant pathogenic ones.