He was a 65 year-old previously healthy avid exercise enthusiast on no medications who was referred for evaluation of two near-syncopal episodes. The first episode occurred approximately 10 minutes after he stopped exercising on a treadmill. He felt he had to grab the wall to prevent himself from falling. 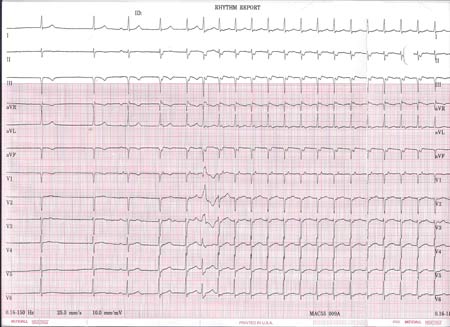 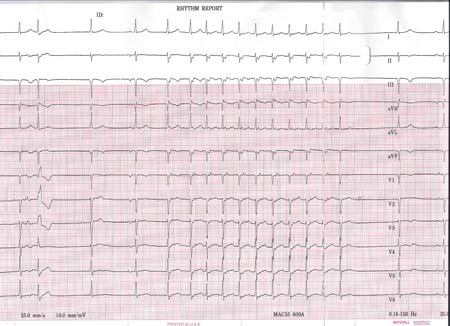 Any ideas? What therapy (therapies?) would you recommend?

AVNRT? It looks like it is set off with a PVC in the first strip. It looks like the P-waves are visible just after the QRS complex. If that's the case, send him off to the electrical subcontractor :).

Sick Sinus Syndrome. Especially if it's been occurring regularly. He's going to buy himself a dual chamber pacer, and a daily dose of whatever anticoag the doc wants. For prehospital, manage symptoms as they arise, treat for for hypotension, manage his chest pain, serial 12 leads, and quick transport to the local ED with PCI capabilities, and better yet, one with an EP lab.

I think it could be either a focal atrial tachycardia, possibly originating from the right sided pulmonary veins, or a junctional (automatic) tachycardia - I think I'd discuss about an EPS to be able to diagnose and possibly treat it. Rate control isn't that feasible, the basal rhythm being a slow sinus bradycardia alternated with a junctional escape rhythm. Rhythm control, I wouldn't know which drug..

I am just an ecg enthusiast and has been watching tracings in real time for alost 5 yrs (but had a previous med training). Here is my take, his arrhythmia starts with junctional bradycardia then a sinus beat follows then a narrow complex wtih a nearly superimposed P wave. After delay of about 600 ms the tachyarrythmia starts. This seems to be a short RP tachycardia (RP about 80 ms). The 2 intial P waves is almost superimplosed on the QRS but later the P waves seems to be distinct after the QRS. An abberantly conducted QRS (ashmann's phenomenon) can be seen with a P nearly superimpose on it. There is spontaneous termination of the arrhtymia. There could be 2 competing pacemakers here (AV dissociation).One from the jucntion and the other inferior and from the left atrium (negative P waves II, III and aVF and positive P in V1). So could this a tachy-brady syndrome (junctional tachycardia on top of atrial tachycardia. If this proves to be the cause of the pre-syncope so PM can help. Drugs maybe not. Just an idea.

dual AV nodes and a very slow slow pathway creating a 1 P wave to 2 QRS response at baseline. The slow pathway jump allows retrograde re entry up the fast pathway with a retrograde p wave seen on all but the last QRS of the SVT, suggesting re entry as the mechanism. The patient needs a slow pathway ablation or a trial of an AV nodal agent to make re entry and the 1:2 response less likely.

His tachycardia is a response to his bradycardia. Why does he become bradycardic after exercise ? I saw a guy years ago ho became bradycardic during stress test, no other symptoms and normal stress test. He ended up with a pacemaker and an MI 3 months later.

how about some love Dr. Wes, what did you find on the EP study?

My love can be found here.