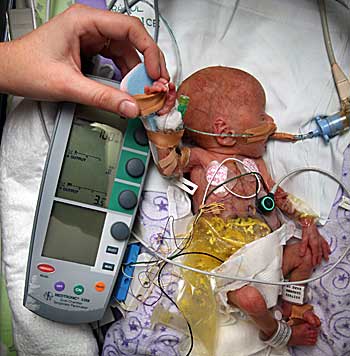 When she was fitted with the (external, temporary) pacemaker, nine hours after her premature birth three weeks ago, Taylor weighed only 541g and is believed to be the smallest baby to undergo such an operation. She is now a healthier 720 grams (19oz), but is still so small that the grey and green heart regulator appears bigger than she is.

The pacemaker is an external one for now and will be replaced by a much smaller internal device, once the the baby grows sufficiently.

I went into labor at the same gestational age as that mother did. Thankfully with many weeks of complete bed rest, meds, etc, my son was born "on time". When I look at photos of preemies at the same age he would have been, I cannot even describe how I feel. (other than thrilled my pregnancy was able to continue longer!)

Medicine can be amazing sometimes.