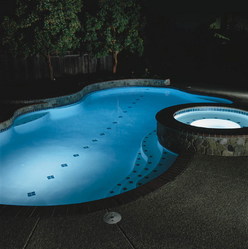 It was a beautiful time of day - early evening as the sun was setting. She has just turned sixty and traveled south to visit her 39-year old daughter in a warmer climate. Both had decided to go swimming at the local pool early one evening. The water was perfect: not too warm and not too cool. The clear blue water was made more inviting by the pool lights that illuminated the swimming lanes. Most of the people were packing up to head home at the end of the day, offering her an opportunity to go some extra lengths to improve her endurance.

It had been eleven years since she had received her first defibrillator for a rapid, life-threatening heart rhythm that had unveiled her weakened heart muscles to doctors. By now, she had grown accustomed to its presence - only bothered by the occasional follow-up visit to check its functionality.

Her strokes were long and regular as she swam and for a while, she picked up the pace a bit to test herself. Not long thereafter, she grew tired and decided to rest at the deep end of the pool before finishing the last half-lap back to the shallow end.

She swam up to the wall and pulled herself up a bit and rested her arms across the cement and rested her head on her arms. With that, she noted she suddenly could not move, her arms locked in place as a tingling sensation coursed through her body. Try as she may, she was unable to move. The seconds seemed like an eternity. She thought, "This is it. I'm doing to die."

Suddenly, a huge jolt coarsed across her body that threw her from the pool's wall into the deep water and caused her to cry out involuntarily. Her muscles, fatigued by their prior capture, were of little use as she struggled to breathe. Her poolside daughter, turned to see her mother disappear below the surface of the water. She jumped in and swam to her, pulling her to the shallow end of the pool and eventually to a neighboring chair. Slowly, after both had regained their strength, they pondered the circumstances but quickly dialed 9-1-1 and pleaded for an ambulance to come as soon as possible.

Later, in the emergency room, her defibrillator was queried and the following noted: 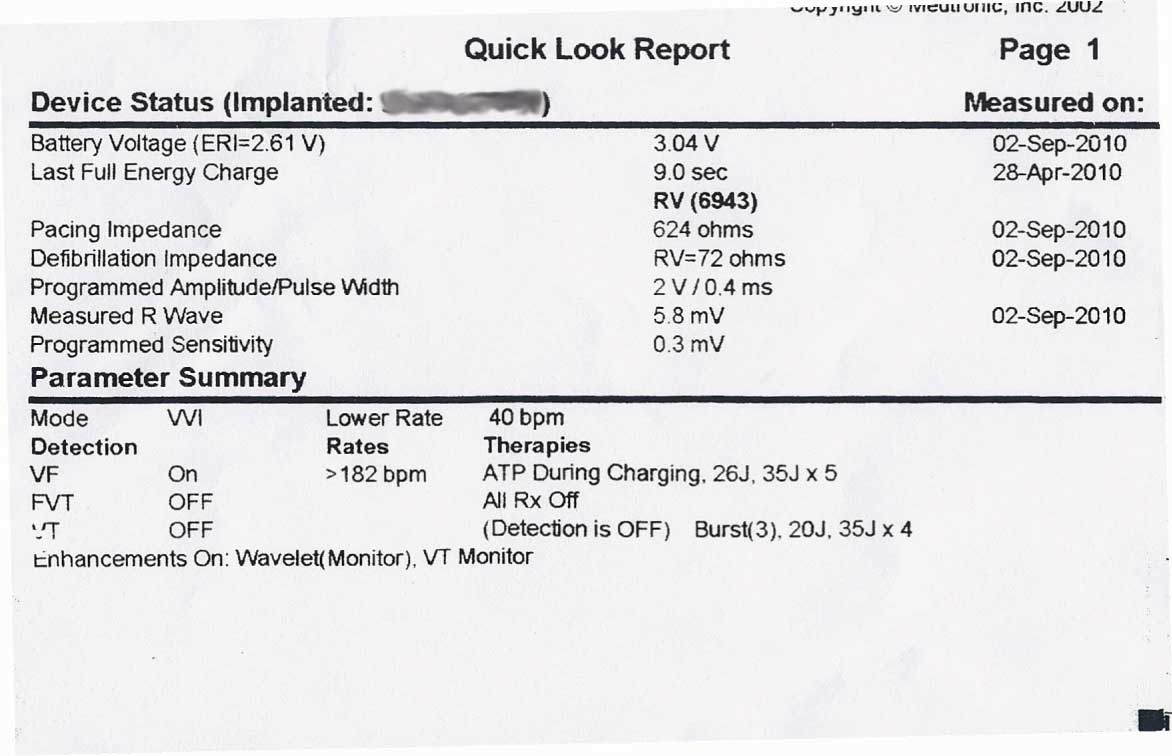 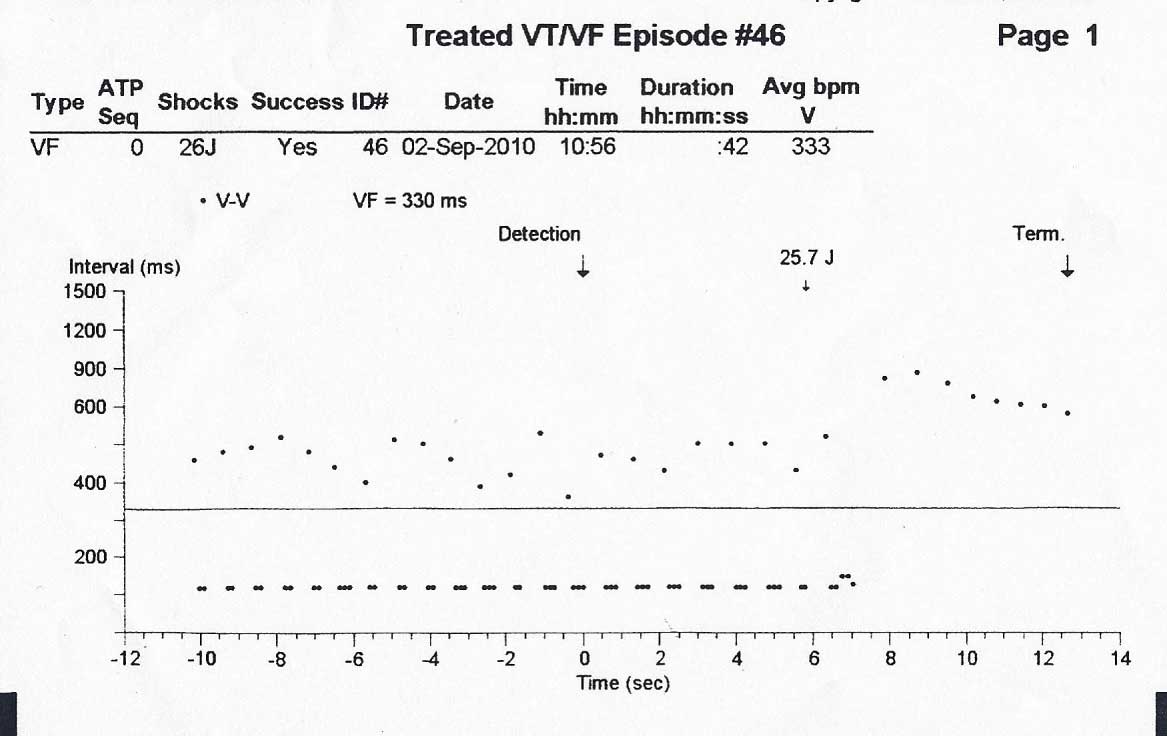 RECORDED DEVICE ELECTROGRAM FROM THE EVENT
(Click image to enlarge)

At this point, it became clear what had transpired: she had been electrocuted at the end of the pool. It seems she came in contact with the pool light's cover as she rested her arms the the pool's edge. Her implantable cardiac defibrillator, detecting the electrical current in its circuitry, did what it was programmed to do when non-physiologic signals are detected on its lead: shock her to restore her rhythm back to normal. And yet as seen by the electrograms from her device, her rhythm was normal at the time and the device had detected the noise from the alternating current coursing through her muscles, causing the device to fire. By that very action, she was thrown far enough away from the current source to escape the deadly grasp of the myoclonic tetany caused by the electric current.

I'm not sure I have ever seen an electrocution stopped by a defibrillator before.

A call was made to the pool operators later the same day as the incident occurred. The pool was closed and the pool's electrical systems inspected. It was later that she learned that the pool's lights had been changed the day before and a grounding wire to the light had became disconnected, resulting in the leak of current to the light's metal housing. The pool has now been re-opened, rendered safe by the county's electrician just in case anyone else without a defibrillator would like to take some laps.

as someone who has just had an icd implanted, that was a very interesting story. I love to swim and will be very careful in the future.

I remember a couple of years ago reading a few case studies in PACE about this.. where an ICD had prevented accidental (and intentional) electrocution..

Terrific story and great graphics. A very fortunate lady and let us hope that she lives much longer and prospers. I was gratified to realize I could interpret the readout. I am just back this morning from my EP who preformed a atrial ablation two months ago and my interrogation revealed no Afib and one short svt episode. We are looking at cutting back my Tikosyn meds in about three more months.

Thanks be to the miracle of modern medicine and technology

A fantastic case; thank you for sharing this. The 60 cycle oscillation of the AC current can actually be observed in vivo on the ECG as "artifact," beginning and then terminating after the ICD counter shock.

From the description, the electric current probably flowed mostly through the larger thoracic muscles and out through those of the arms. I speculate that if she had grounded - rested- her head instead back to cement edge, with wet hair to aid grounding, current could have flowed through the neck and head preferably, and thus more centrally via the great vessels and possibly induce VF more easily than as she did. Should the gov regulate swiming pool electrics as stringently as medical devices are ( allowing a single electrical fault) ? After all the pool is one good electrode, esp near metal.

More good luck to her, and many more years to her !

Really interesting story. Saw exactly the same thing a few years ago but patient had been away on holiday and we weren't able to confirm pool light grounding issue. EGM here is a great tool for explaining auto-adjusting sensitivity in Medtronic devices.

Dr. Wes,
I was looking for another way to contact you, but in lieu of that, I wanted to inquire as to if it would be possible to reproduce the ECG here on my own electrocardiography site, http://thejarvik7.wordpress.com/. I would link back to you appropriately and credit the ECG to your blog. I find it a wonderful case and I was thinking of including it in a discussion of artifact. Thank you for your consideration and your contribution to the online electrocardiography community here.

WOW! That is amazing!

I've waited 20 years for someone to be MORE shocked in a pool. I was swimming my laps at the gym, and stopped to rest a moment at the shallow end. A elderly regular approached, so I gave the customary, "How you doing" and the nod. He responed, "I was molested as a boy," and continued with some detail that he held in for some sixty or so years, having chose this particular time to get it off his chest. So I nodded and tried to stay calm, and after what seemed like an eternity, I said to myself, "I think it's best if I took off my goggles." I just listened, confused why I would be the recipient of this secret knowledge, and kept telling myself to act like this is a normal conversation. I forget how many hours that was--probably just five or ten minutes.

ANYWAY! Thanks Wes for sharing that really amazing story. Without this technology that woman would never have survived. If someone prayed that the very hands of God would work through her surgeon--then NOBODY can question that's exactly what happened. God bless the good guys!