Anyone who has ever been on call for the Electrophysiology Service has to check a patient's pacemaker or defibrillator once in a while. To do this, we have to know which company manufactured the patient's pacemaker or defibrillator so we can grab the appropriate programmer that allows us to "talk" to the device in question. Often, these devices are lugged to far ends of the hospital, found to be the wrong device for the patient's particular device, dropped, or a small piece of the necessary equipment is left behind and must be retrieved. Suffice it to say, these devices get heavy after a while.

Since none of the companies have elected to standardize their process of pacemaker interrogation so the clinicians only have to lug one such device to a patient's bedside, they have left themselves open to public ridicule.

Soooooo, in the spirit of "friendly competition," I've decided to have the first ever "Pacemaker Programmer Weigh-In." Will it make them want to come together in the interest of patient care? Probably not, but it's fun to think it might get them thinking about such an endeavor again.

This was a carefully-conducted experiment, audited by PricewaterhouseCoopers (just kidding), and performed on our carefully-calibrated and zero'd cath-lab scale. Proof of the process is shown: 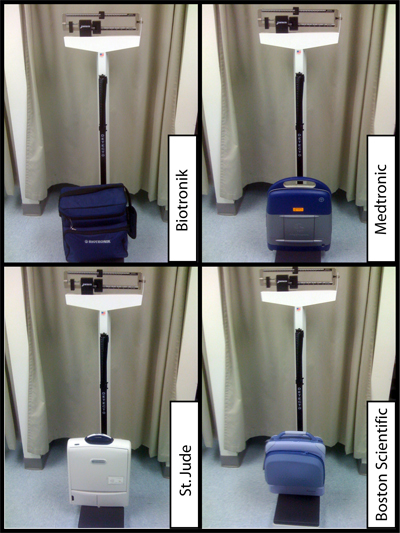 So, which manufacturer has the heaviest programmer and which has the lightest?

What's the range of weights?

Biotronic is the heaviest??? Medtronic the lightest?

Nothing's heavier than the old Pacesetter programmer. Remember how the cover was installed so that it would hang upsidedown and fall off everytime you tried to carry it anywhere?

Fortunately, the Pacesetter programmer is no longer used. And despite the weight, the programmers have gotten a bit lighter than that. Still, the the era of iPhones and ultra-light laptops, medical devices are anything but truly portable.

Here's the breakdown of weights (I was surprised by how similar they were):

So St. Jude, Boston Scientific, and Medtronic were within one pound of each other, while Biotronik's programmer needs a serious diet.

that is great, i often wondered about those things.

Dump the Bio bag and weigh it again

Since the St Jude programmer is the lightest, you should implant strictly STJ devices. This would make it easier for you when you have to check your own device. Thanks. Also buy some STJ stock, for it will continue to be the best of breed in this space.

Just caught up on a few days of your blog. My god, how much do you read a day and when do your do it??? (this thought came to me by the time I got down to the pen-knife/pacemaker story). My husband is always coming up with some obscure piece of information and I wonder the same thing about him...but I live with him, so you'd think I know.

You made a very good point about standards in health care and the amount of time wasted too.