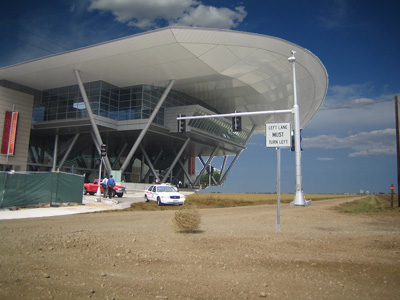 Well, maybe the Heart Rhythm Society Meeting wasn't quite as bad as depicted in the above photoshopped image, but there's no question that attendance was lighter than I have remembered it in some time this year.

There were a number of factors for this: I am told a whole contingent of doctors from Japan were held back because of the lingering concerns of Swine flu. Then there's the fact that the Boston Atrial Fibrillation Summit was here earlier this past winter (who wants to travel to the same city twice?), and finally and perhaps most importantly, the recession. I met one nurse from Vanderbilt (Nashville, TN) who noted that all elective travel was suspended as a cost-saving measures in place. She only attended because she was paid to come and speak to a session for Allied Health professionals, effectively making her attendance at the meeting cost-neutral for her.

Now while this might not seem like a big deal, the implications to limiting continuing medical education to our health care team is concerning. But it's an easy thing to cut, right? After all, a penny saved is a penny earned. But what are the long-term implications for patient care if funds for continuing education are sacrificed? Certainly, if the downturn is brief, missing a meeting or two probably won't have much effect... or will it? Do we know?

And yet, despite this, the usual regiment of sales representatives for companies eager to get their face in front of doctors were ever-present. But the mood seemed muted, uncertain, as device companies were doing their best to stay upbeat despite the economic uncertainty. All were aware that Massachusetts, the home of the original North American Society of Pacing and Electrophysiology (from which the Heart Rhythm Society morphed) and home of the current organization's president, will implement a law 1 July 2009 prohibiting medical device companies and pharmaceutical companies from courting their physician customers at these meetings. (No wonder the Heart Rhythm Society moved from Massachusetts to Washington, DC, eh?) While I understand the implications of the law, will this trend continue nationwide? Are medical conventions and doctor meetings as we've known them a thing of the past? Will we just meet online instead as the ultimate cost-saving trend?

Hopefully not. But it was not easy to see a definite change is occurring, and it's coming faster than we think.

Well, got to board the plane back to Chicago. See you back home soon.

Tele-conferencing is not an option? I can only "go" by commercials on television but it is my understanding that some large companies using this media.

Oh sure, teleconferencing is an option. But humans are, by there very nature, social creatures. Much of the allure to professional meetings is to reconnect with people from all over the world in person: to share stories, a handshake, and to talk offline. Businesses know the value of relationships like this. So do doctors. If everything said is in a public forum like teleconferencing, innovation in our field would be stifled.

That is an interesting concept that, if I understand correctly, a person retains more information and innovation is fostered with face-to-face contact.

I am not in business or medicine, just a disabled veteran from the first Gulf War.

Thank you for your response.

I would have attended (a friend attended and could have split the cost of a hotel room), but the fees for the conference were the main roadblock. The airfare and hotel room would likely have been about the same as the registration fees. ACC has a much lower cost for registration, so I usually attend that meeting.
You can give that feedback to HRS - lower the reg fees and non-MD staff may attend.
CardioNP