A Big Day for Cardiac Electrophysiology 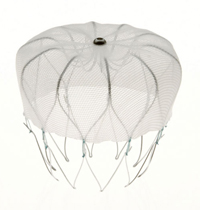 The results of the PROTECT-AF trial, the trial testing the "non-inferiority" of the WATCHMAN left atrial appendage occlusion device manufactured by Atritech to the blood thinner warfarin, are in. Things look, well, I'm not sure. At least they seem to have proved "non-inferiority" of the therapy against warfarin (Coumadin) in terms of all strokes. For interventional cardiologists and electrophysiologists, that's a big deal. But there were twice the upfront safety issues deploying the device: most often pericardial effusion, but some air emboli and device embolizations occurred.

Granted, this was a first-generation device and the experience with this procedure was non-existent. No doubt the learning curve was significant for both doctors and the manufacturer of the device.

theHeart.org (aka "Heartwire") did a much better job discussing the intricacies of the trial design, limitations, and the results than I could in this brief blog post. I'm not sure I can add much to their excellent reporting and commentary from the experts involved in the trial.

What is clear from the trial is that warfarin can be dangerous and so can the devices. The hope with this device (and others like it) is that as time goes on, the upfront complications of the device implant procedure will be more than offset by the ongoing and never-ending potential bleeding complications encountered with warfarin. Right now, though, with the small number of patients studied and the short follow-up, it looks like a relative draw. In this area of "comparative effectiveness research" and cost-cutting, will the data be strong enough for the FDA to grant approval? We'll see.

I had an opportunity to observe a Watchman device be implanted last Monday.

Suffice it to say: it's a fairly complicated procedure an the full costs of this procedure are probably not just wrapped up in the device cost. After all, this is not just putting a sophisticated cork in the opening of the left atrial appendage.

There's much more to it than that:


But once the new device is seated just right, the tug test secure, the measurements proper, then comes the moment of truth: where the device is deployed. And there's that brief sigh heard collectively in the room when it appears to have attached just fine. And the equipment is removed from the heart. I can't imagine what it must have felt like in the few cases where the device wasn't secure. Ugh.

But as it was, there were high fives all around for a (conservatively) two-hour successful procedure.

These procedural issues are significant but might become streamlined as experience is gained at implanting this devcie. Still, this is not a simple "chip-shot" procedure and the risks of implantation will need to be carefully balanced against the risk of warfarin complications if this device becomes approved.

Could this procedure be recommended for someone with afib who also has PFO?

I would assume so, especially since the patients who receive these devices have a transseptal puncture performed anyway (creating a small PFO that usually heals in 2-6 weeks).

However, you bring up a good point. We have devices to close PFO's to prevent "paradoxic emboli" (ischemic stroke) in people with cryptogenic stroke, right? This leaves open the question of whether this might explain some of the trend to increased ischemic stroke with this technique. And this trend should not be discounted since a foreign body is being placed in the left atrium. For now at least, according to this prospectively randomized study, the incidence of ischemic stroke was more than offset by the risk of hemmorrhagic stroke in patients who remained on warfarin.

What would have been interesting would have been to have a third arm with aspirin therapy only to decrease the hemorrhagic stroke incidence, but still leave some CVA protection (though given the prior literature out there, I'm not sure an IRB would approve).

From the picture the device looks as if it's function is to stiffen the atrium. Does it conform to interior? Also the barbs I would assume are at the v shaped loops at the bottom. It looks like a parachute!

Yep, the tiny barbs are at the bottom of the device. The top portion is technically considered a "filter" rather than a "plug," but is rapidly endothelialized (covered with tissue) and quickly serves to occlude the appendage. The size closen is 10-20% larger than the appendage opening to assure stable grasp of the appendage tissue.