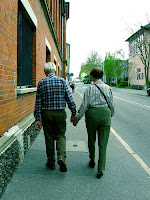 It's happened twice this week. Names, long forgotten, resurfaced. I have noticed that several of my patients need their defibrillator or pacemaker battery replaced - ones I placed seven years ago shortly after I started at my present position.

Being in the Navy and then private practice for several years, my wife and I rarely lived in one place for very long. We've moved eleven times since our marriage. Similarly, the field of electrophysiology is so procedural that patients are usually "returned" to the referring physician for their chronic management, so interactions with your patients can be hard to maintain.

In each case, the patients were relieved as they walked in to my office and saw a familiar face. It seemed almost like yesterday, as we each tacitly noted that the color of our hair was a little gray-er and their stance a bit less certain. Much had happened since I last saw them: many had experienced loss and were dealing with new challenges. Each had taken time with family and friends and seemed all the better for doing it. It was nice to know they've done so well for so long.

I reflected on this while I walked the dog last evening for her nightly constitutional and realized that I really enjoy being in one place for a while.

Email ThisBlogThis!Share to TwitterShare to FacebookShare to Pinterest
Labels: Life

Moving around - has major advantages that I don't need to annotate (to anyone who was part of the military).

But it also has its disadvantages.

In this highly society, probably not so much, but I've left areas and lost touch with people who I considered to be good friends. They were too, but absence can also make the heart grow amnesiac... Particularly when you know you are never likely to return.

Ah well, we all make new and true friends when we move on. But there is still that longing for my friends of long ago. As they say, there is no mirror so clear as the one held up by old friend.

It takes me a long time to make new friends. The curse of a large family is that you have so many built in easy friendships that the work of forging new ones can be intimidating.

I am afraid if I had moved around as much as you had, I'd have no friends at all.