Over 1,800 individuals, the vast majority of whom are working US physicians from a diverse range of subspecialties, contributed to this effort. These contributions were truly voluntary and made by people who felt strongly that the monopoly power these organizations unjustifiably enjoy over us needed to be held accountable for the harms (economically, emotionally, and professionally) they are causing to working physicians and our profession. This milestone proves that physicians can still do incredible things when they put aside their differences and work together.

While the results of the multi-year legal effort remain uncertain, many beneficial results have already occurred. But we should acknowledge that nearly 40% of our contributions were anonymous donations owing to the threat many physicians still feel from these organizations at their workplace. Simply put: our work is not done.

While there is still much to do in this David vs. Goliath effort, on behalf of all of us at Practicing Physicians of America,  thanks to all of our contributors for a job well done.

P.S. Further updates regarding the status of these class action anti-trust cases will continue. Physicians still wanting to contribute are encouraged to do so.
Posted by DrWes at 10/25/2020 09:08:00 AM 16 comments:

The oral arguments in the appeal of the dismissal at the District Court level of the Kenney et al vs American Board of Internal Medicine (ABIM) class action antitrust, RICO, and unjust enrichment case were heard before the 3rd Circuit Court of Appeals today and are available via audio file here. The following interchange starting at 32:58 in the audio file was interesting (I have added a few personal comments/thoughts in italics):

ABIM Attorney: "I think you can first look to, um, look to the facts in this case. For instance, Dr. Manolo who, who never, who did purchase initial certification and never purchased Maintenance of Certification. I think that certainly shows that his purchase of initial certification was not contingent on the later purchase of Maintenance of Certification. (Comment: It also shows there are two products). So I think that is one way you can look at it. I think you can also look at it in the way that the Second Circuit indicated in the Smugglers Notch Homeowner's case which is a case where, which looked at, when you're entering in to the transaction and you know that, in fact, you're that going to be required, there are certain components, parts, of that entire transaction, and you know that up front, and you voluntarily nonetheless enter into that contract, that there is no forcing."

Judge: "But counselor, what I'm talking about is it might not be so voluntary - they want to make a living, are they forced to buy your product? You seem to say no they're not forced to, but is that essentially an issue of fact more appropriate for summary judgement?"

ABIM Attorney: "Um, I would suggest not because I think when courts look to forcing they look at what is the situation at the time of the initial purchase? At the time of the initial purchase here ABIM had a program for certification and aspects of that program were initially passing the initial board certification exam and that that certification would expire after a set period of time - ten years - without unless diplomate passed subsequent examinations. And so when they, up front, bought that product they knew there would be a continuing obligation as part of the certification program, that they would have to demonstrate, in fact, that they possess the requisite knowledge to hold themselves out and say "Yes, I am ABIM, or board certified." So there is no forcing because there is the knowledge up front at the time of purchase of what certification entails, um, and that was the periodic demonstration of knowledge."

Judge: "But I suppose that the most basic form of your argument is, they don't have to go through ABIM to practice."

Judge: "But this does go to your market power, I mean, yeah, it's true, you don't need the ABIM certification. But is it really feasible not to have it, in reality? And I think, the allegations, don't they say, a lot of places won't let you practice, your malpractice rates are going to go higher, reimbursement's going to be an issue. So is it really feasible to practice without certification and is that something that should be a subject of discovery as opposed to, you know, at this juncture with a motion to dismiss to resolve?"

ABIM Attorney: "Well. well many, I would submit many internists do, in fact, practice medicine, um, without ABIM certification and there are many things that might affect how much you are paid, what your admitting privileges are - things like where you attended medical school and many other factors. (Comment: And if you believe this, I have some ocean-front property to sell you in Arizona). But it really comes back to, you know, what is at issue in this case and whether, in fact, there is a tying claim and whether or not there is, um, one product or two products and that really goes back to the Supreme Court test in Jefferson Parish about the character of demand and whether there is demand for the tied product in absence of the typing product.  And here, the Appellants want to hold themselves out as being "board certified." There is no separate demand for the tied product in the absence of the tying product. And that is something I think is, is something that, you know, the Court in Jefferson Parish makes clear. Justice O'Connor when she expands on the words in that saying that for products to be treated as distinct, the tied product must, at a minimum, be one that consumers might wish to purchase separately without also purchasing the tying product. And here's.. there's simply... there are no allegations of fact sufficient to move this case along to make a plausible case that there are, in fact, two products here because there is no consumers, there are no allegations showing there is demand to purchase the tied product without also tying the tying product." (Comment: OMG, Seriously?)

The judges asked the right questions. Now we have to wait to see if this case is sent back to the District Court for discovery.

I will have additional comments about other aspects of these oral arguments in the days ahead.

PPS: If you'd like to help the plaintiff's along their lengthy legal quest to improve the lot for all US physicians regarding MOC, please contribute to the GoFundMe page sponsored by Practicing Physicians of America.

The Important Week Ahead

This Friday, 23 October 2020, oral arguments will be heard before the Third Circuit Court of Appeals regarding Kenney et al vs. the American Board of Internal Medicine (ABIM) class-action antitrust, racketeering, and unjust enrichment lawsuit (Case 20-1007). Some eyes of US physicians and all the eyes of the US certification industry will be on these arguments, even though the oral arguments are, for all intents and purposes, little more than theatre since written arguments have been fully briefed on both sides.

But the stakes for working US physicians and the physician certification industry could not be higher. Since the introduction of Maintenance of Certification® (MOC®) in 1990, ABMS board certification and lifelong re-certification have evolved into a $1 billion enterprise annually in the United States, nearly all of it funded by US physician-paid fees leveraged by coercive tactics and the monopoly on US certification enjoyed by the ABMS and its member boards.

As this week unfolds,

The Unjust Enrichment at ABIM 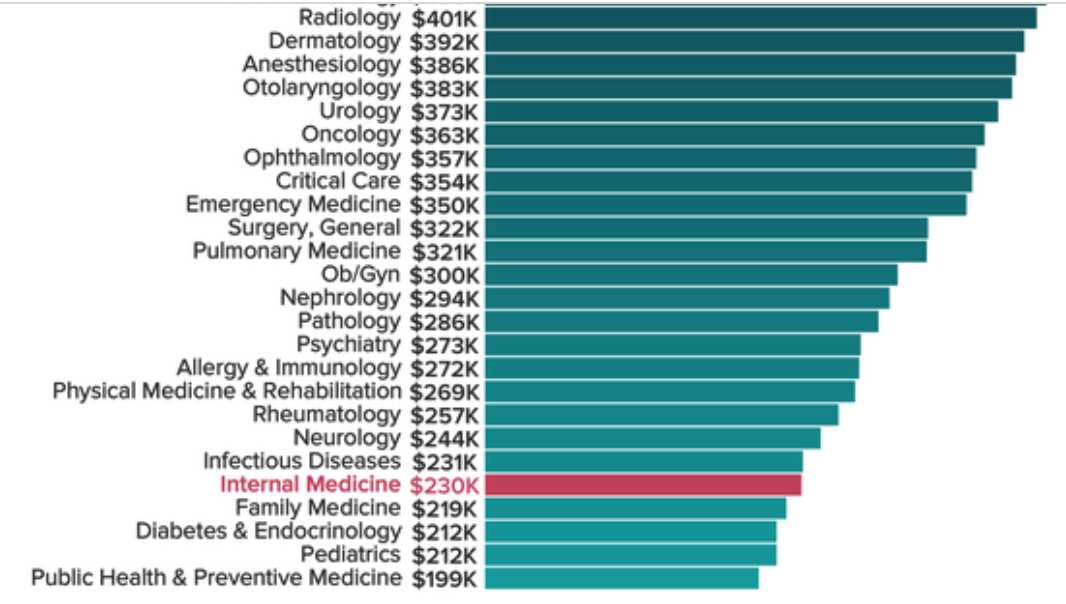 That same year, according to recently-released tax documents, Richard Baron, MD, President and CEO of the American Board of Internal Medicine (ABIM)  and the ABIM Foundation, earned a cool $1,425,605 and non-physician Rebecca Lipner, the Senior Vice President, and Chief Financial Officer (who has never authored a study that wasn't supportive of the certification industry in her tenure with ABIM) earned $758,502:

(It is also notable that ABIM has a former PriceWaterhouseCooper executive serving as Chief Medical Officer that earns over half a million dollars annually as well).
Internists pay these salaries from their testing fees. Those same testing fees also pay "bonuses" that these executives unilaterally decide to bestow upon themselves, including "retention bonuses." But a "retention bonus" from an "early retirement severance package" makes absolutely no sense at all.
From ABIM's 2018 Form 990:

"IN 2016, ABIM MADE AVAILABLE TO CERTAIN ABIM EMPLOYEES AN EARLY RETIREMENT SEVERANCE PACKAGE WHICH INCLUDED A PROVISION FOR YEARS OF SERVICE. REBECCA LIPNER, ABIM SENIOR VICE PRESIDENT OF ASSESSMENT & RESEARCH, QUALIFIED FOR THIS EARLY RETIREMENT SEVERANCE PACKAGE. IN AN EFFORT TO ENCOURAGE HER TO STAY, ABIM OFFERED REBECCA LIPNER A RETENTION BONUS TO REMAIN EMPLOYED WITH ABIM AS SENIOR VICE PRESIDENT OF ASSESSMENT & RESEARCH THOUGH 6/30/2018. THE 2-YEAR AGREEMENT, SIGNED IN MARCH 2016, PROVIDED FOR THE PAYMENT OF A RETENTION BONUS WITHIN 30 DAYS AFTER 6/30/18 IF CERTAIN TERMS AND CONDITIONS, AS PROVIDED IN THE AGREEMENT, HAD BEEN FULFILLED.
AS OF 6/30/18, THE TERMS AND CONDITIONS PROVIDED FOR IN THE AGREEMENT HAVE BEEN FULFILLED. IN COMPLIANCE WITH TERMS OF THE SIGNED AGREEMENT, IN JULY 2018, ABIM RESEARCH, A ONE-TIME RETENTION BONUS IN THE AMOUNT OF $300,000. AS PER INSTRUCTIONS FOR SCHEDULE J, $300,000 WAS INCLUDED ON SCHEDULE J PAID REBECCA LIPNER, ABIM SENIOR VICE PRESIDENT OF ASSESSMENT..."

Salaries to some executives of the ABIM have almost doubled since 2010. These exorbitant salaries and questionable "bonuses" are little more than taxation to physicians without appropriate representation.
It is time to end this nonsense.
-Wes
Posted by DrWes at 10/12/2020 08:46:00 AM 6 comments: