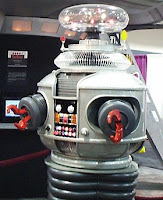 Monday I traveled to Minneapolis to tour Boston Scientific and learn about the "project Aurora" initiative to clean up their shortcomings that lead to an FDA warning letter which halted their production line. (They devoted some 600 engineers and $140 million to "re-vitalize" their business, they said.)

But along the way, I had the chance to meet with many other electrophysiologists (we call them EP's) from the Chicago area - good guys all - each at the top of their "game," so to speak. We discussed the the future of our field: new ideas and innovations. And naturally, up came the subject of "robots" - specifically robotic assistance for catheter ablation - especially atrial fibrillation. Two main companies are in this space right now, Sterotaxis, that uses some big magnets to move a magnetic catheter in 3D space, and Hansen Medical that uses a motorized robotic sheath system to steer a catheter in 3D space (I blogged on this earlier). Here was the discussion that transpired:

"Yeah, we're going to have two new ones later this year."

"Our center is moving to some new labs and we'll have one, too."

"Is there any data to demonstrate efficacy with these devices?"

"Not in any prospective, randomized, multi-center way, no."

"Do you think these things will help?"

"I don't know. But it'll be cool to play with 'em. I'm looking forward to having an opportunity to really see the potential of this technology. Certainly, the hospital likes the marketing opportunities..."

"We'll have to see. Our center got one donated through a grateful patient, so our return on investment will be immediate via marketing. I mean, it's almost like you have to have it to say you're on the 'cutting edge.'"

"Why haven't there been any multi-center studies with these things?"

"Simple. They really don't want to do those studies. They're expensive. Why would a company want to spend the money to study them when centers are buying them anyway? Everyone wants to say they are on the 'forefront' of medicine, right?"

I mean, technology is so sexy, isnt it? Multiple computer screens, 3D graphics, joy sticks with multiple degrees of freedom and pre-designed programs, built on models, that move a stick in 3D space using cool whirring motors or magnets. I mean "pulling" the catheter where you want to go - what could be better?

And I can sit down! No more hemorrhoids! No more swollen legs!

But realistically, each system has its limitations. I have already mentioned some of those seen with earlier iterations of the Sterotaxis system, and Hansen has been plagued by rumors of cardiac perforations.

In the old days of EP, catheter ablation defined itself by number of radiofrequency applications (less was better to minimize injury to the heart), procedure times, acute and long-term procedural success. Are ablation times shorter with robots, hmmm, haven't heard. Better outcomes? Nothing. I have heard about the "learning curve." One novice doctor noted it was hard to even move the catheter to the His bundle position with one of the systems when he tried since this location was not "pre-programmed."

And yet these devices are "approved" by our FDA. Deemed safe, effective by a 510(k) approval process that states:

A 510(k) is a premarket submission made to FDA to demonstrate that the device to be marketed is at least as safe and effective, that is, substantially equivalent, to a legally marketed device (21 CFR 807.92(a)(3)) that is not subject to PMA (pre-market approval). Submitters must compare their device to one or more similar legally marketed devices and make and support their substantial equivalency claims.

Safe and effective perhaps for simple atrial flutter ablation, but atrial fibrillation? Really? How many cases were submitted to the FDA? Twenty?

Now I am no Luddite when it comes to all things technical. I love technology. And I certainly think that studying these devices to determine safety and efficacy should be done.

But I see a trend now where the amount of heart destroyed doesn't matter (some feel if enough ablation is performed, all afib will eventually cease - and they're probably right - but what about atrial transport?) Marketing, marketing, marketing of the latest, yet not necessarily the greatest robot, seems to be the norm. Science and the rigor required to determine efficacy and safety are squeezed by ever-tightening research budgets while companies are permitted to expand without demonstrating superiority, only equivalency.

And it all costs our patients (via the Medicare National Bank) millions and millions of dollars.

i fully agree with you. i am in the process of building a new lab. i have budget for it, but was unconvinced that it is time to make the investment. we are building a room that will accomodate the technology in terms of size/space/weight, but have decided to wait a little while to see.

Might this not be similar to cruise control systems in cars in a way? There might not be studies of how one's pleasure is improved with having cruise control for long drives, but people still know of the benefit.
Of course this is a multi-million dollar investment, so your point is well taken that objectivity is important here.

I see I've got you hooked on the Medicare National Bank! I love it. Great take on this one. And as long as the MNB pays for it, people will buy them and future generations will pay for it.

Yeah, Happy, I'm a fan of your term, "MNB" - sorry I didn't acknowledge you - it captures the essential point here so well...

As for rumors about Hansen perforations, it is true. Check out Andrea Natale's presentations at HRS this week, and also the others which show procedure times just approaching manual. Not looking good for the Sensei, IMO.