The Politics of Black Boxes 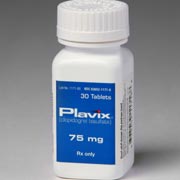 It's been several months since the black box warning on clopidogrel (Plavix) appeared and most cardiologists I know have not changed their practice as a result. I asked them to write about this on this blog, but because of the potential future legal ramifications of admitting as much, they politely declined.

For those unfamiliar, this black box warning, added to the drug's package insert by the FDA in March of this year, tells doctors who use this drug:

When you ask interventionalists what they think about this genetic testing to assess who might be a "poor metabolizer" you get a blank stare and many reasons why no one does it, like:

We know that there is a political push by President Obama and his NIH director, Francis Collins, MD, PhD (a geneticist) to use "personalized medicine" (read: genetic tests) as a way to come up with recommendations for medical care:

"As we learn more about individual's risk – from family history to DNA testing to understanding of environmental exposures – we ought to be able to come up with recommendations that are more personalized. I think people are ready for that. I think they're hungry for that. I think they are more likely to be responsive to that, but we have a long ways to go in terms of preparing people for that kind of individualized approach to medicine."

Today, "you can get fancy DNA tests for hundreds of dollars," Collins told The Endocrine Society meeting - but your better bet for now may be a simple family tree of health, checking what ailments Mom, Dad and Grandpa had to predict your own future. "That's a free genetic test of great power."

So we should ask ourselves why a 40-patient crossover trial and retrospective analysis of outcomes qualifies as top-notch research on which to base a black box drug warning that also supplies no dosing recommendations to doctors if such a test is positive.

It wouldn't be the money generated by genetic testing for companies (see here and here) and hospitals who stand to make a pretty penny on them, would it?

"The challenge is to deliver the benefits of this work to patients. As the leaders of the National Institutes of Health (NIH) and the Food and Drug Administration (FDA), we have a shared vision of personalized medicine and the scientific and regulatory structure needed to support its growth. Together, we have been focusing on the best ways to develop new therapies and optimize prescribing by steering patients to the right drug at the right dose at the right time."

Look for more black boxes applied to more drugs with no understanding of the legal ramifications of their use. Is this the caliber of scientific rigor we are to expect from our government's reform agendas?

So, should I tell my doctors about the things I know are true about my father's medical history? I ordered his medical records from the VA and read them. I was amazed at the similarities in our medical histories. I'm just afraid that if I say to my cardiologist or my nephrologist that "My father had this and it led to that. And how do I avoid the same thing?" I'm going to get a blank stare from them, like "why are we talking about your father?" type stare. Should I tell them?

My mother's mother and grandmother died of heart disease. Mom takes Plavix, and is 5+ years post CABG and doing well. She and my grandmother smoked for 40 years. My greatgrandmother was obese and lived around dense second hand smoke. This info is not in my mother's medical records. I can only assume her physicians have never asked. Easier to do the test, despite her age. Drive costs up with no limits, the old fashioned American way. And I have no physical risk factors and never smoked. No cardiac disease. They don't ask that question either. Genetics or lifestle? Which is it?

So I'm 30 and I take Plavix. I started taking it after I had my ASD repaired when I was 25, and have taken it for several years since because it seems to prevent my migraines (weird I know). But it seems there's always some warning around it. I used to take it with baby aspirin (was told to by multiple doctors in the hospital). But i know that was supposed to be bad for some reason too? How does a patient weigh the risks and benefits?

The more important question seems to be - How effective is clopidogrel at preventing ACS/use of PCI?

What is the anticipated complication rate for poor metabolizers vs the expected prevention of ACS/PCI?

What might the complication rate be with aspirin or coumadin?

Without giving any information to help doctors to make those decisions (I agree that the genetic testing will solve everything solution is not a real solution), the FDA is not improving things for patients.