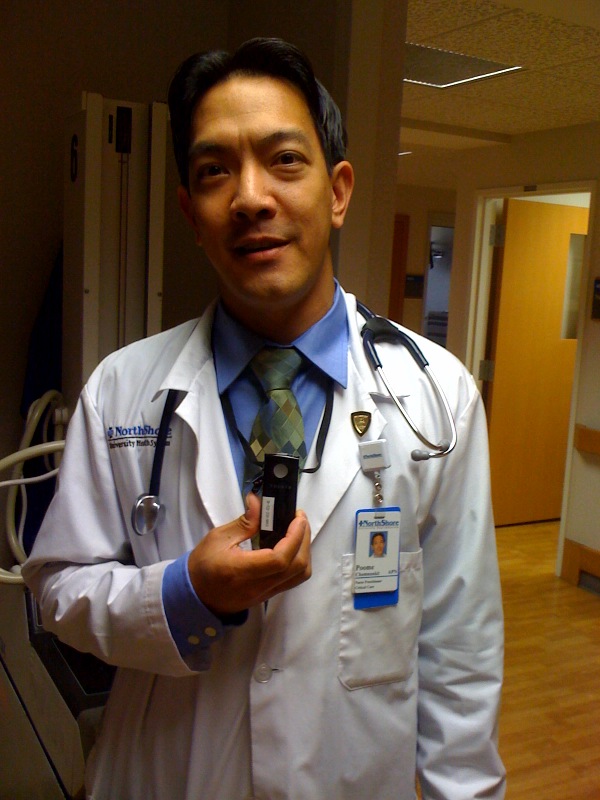 One of our super-cool residents

This little badge-gizmo-on-a-lanyard from Vocera is being tested in our ICU's to facilitate communication between doctors, nurses, pharmacists and other care providers there.

Each nurse picks up one of these devices each shift and "signs in" on the company's website, where the name is associated with the ID number of the device. Push a button, and the device responds "Vocera" meaning it's ready to receive your command. You then say "Call Wes Fisher." The device uses it's voice recognition software and responds "Calling John Sheridan." The nurse quickly pushed the button to cancel the page.

Oops, seems I was not signed in for the system.

So I had them call someone who HAD signed in that shift and it worked pretty well. There was need to drop what they were doing to find a phone. Also, the person on the receiving end did not have to touch the device to respond and the communication was just like talking to each other on a loud speakerphone. One nurse mentioned that conversations could be overheard if family is near, but they could say "Transfer call to extension 1-2-3-4" (for instance) and the call will be automatically transferred to a different phone extension for a more private conversation. They also liked the ability to say "Call ICU pharmacist" without having to leave the patient's room to clarify an electronic order.

Interesting stuff. We'll just have to see how it works when folk's voice commands compete with the overhead intercom calling for a "Code Blue."

Email ThisBlogThis!Share to TwitterShare to FacebookShare to Pinterest
Labels: innovations

We've been using Vocera for years, but mainly only for communicating between the nurses, pharmacists, therapists, etc.

Most recently they've added the new hospitalist group to Vocera. I've yet to call one of them, but I was thinking it would be SO NICE to be able to call the doctor on call (especially the intensivist) through Vocera instead of through the phone. Most doctors will not wear one. The ones that have said they are willing said they've never been given one.

It has its issues for sure. It won't always recognize the name you are trying to say which is frustrating. It can be especially wonky under an isolation gown.

It has certainly come in handy, though, and overall I think it's a good addition to the other crap I have to wear around my neck :)

Our Vocera system is hooked in with our emergency system..so when there's a code..it stops all calls and says CODE BLUE CODE BLUE! So there you go..

Our hospital uses this, and it's a bit weird because everyone you see in the hospital looks like they are talking to themselves. For example, you are in the elevator, someone says something, you turn around, and nope, not talking to you. It's pretty handy, though.

personally i would not want one to be on while i was doing procedures.

i'm not sure how much it adds to the regular old telephone, which at least someone else can answer? i already have a pager and a phone on me. i guess it is handsfree. i'm pretty sure it would increase the likelihood of patient care errors due to distractions. jmo of course.