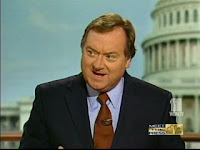 Russert: The night you took the country to war, March 17th, you said this: "Intelligence gathered by this and other governments leaves no doubt that the Iraq regime continues to possess and conceal some of the most lethal weapons ever devised."

Russert: That apparently is not the case.

Russert: How do you respond to critics who say that you brought the nation to war under false pretenses?

And I made the decision, obviously, to take our case to the international community in the hopes that we could do this — achieve a disarmament of Saddam Hussein peacefully. In other words, we looked at the intelligence. And we remembered the fact that he had used weapons, which meant he had had weapons. We knew the fact that he was paying for suicide bombers. We knew the fact he was funding terrorist groups. In other words, he was a dangerous man. And that was the intelligence I was using prior to the run up to this war.

And so we — I expected there to be stockpiles of weapons. But David Kay has found the capacity to produce weapons. Now, when David Kay goes in and says we haven't found stockpiles yet, and there's theories as to where the weapons went. They could have been destroyed during the war. Saddam and his henchmen could have destroyed them as we entered into Iraq. They could be hidden. They could have been transported to another country, and we’ll find out. That's what the Iraqi Survey Group — let me — let me finish here.

And I made the decision to go to the United Nations.

By the way, quoting a lot of their data — in other words, this is unaccounted for stockpiles that you thought he had because I don't think America can stand by and hope for the best from a madman, and I believe it is essential — I believe it is essential — that when we see a threat, we deal with those threats before they become imminent. It's too late if they become imminent. It's too late in this new kind of war, and so that's why I made the decision I made.

Russert: Mr. President, the Director of the CIA said that his briefings had qualifiers and caveats, but when you spoke to the country, you said "there is no doubt." When Vice President Cheney spoke to the country, he said "there is no doubt." Secretary Powell, "no doubt." Secretary Rumsfeld, "no doubt, we know where the weapons are." You said, quote, "The Iraqi regime is a threat of unique urgency.” “Saddam Hussein is a threat that we must deal with as quickly as possible."

You gave the clear sense that this was an immediate threat that must be dealt with.

President Bush: I think, if I might remind you that in my language I called it a grave and gathering threat, but I don't want to get into word contests.

sucks and way too young

Wes, you left a post about the speed of typing on the blackberry. I did some research and the original idea for the bb came from Lazaridis figuring out he could type nearly as fast with his thumbs as on the keyboard.

I'll post others but you can get >60 wpm on that keyboard.