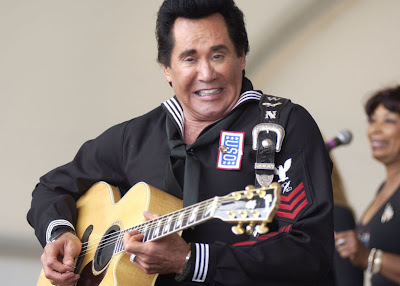 Wayne Newton, the entertainer who took over for Bob Hope for the USO tours, announced that he could no longer keep up with his Dancing with the Stars tour due to “cardiomyopathy:”

The famed Las Vegas entertainer told People this week that he has been forced to clear his schedule for the next few months while he undergoes treatment for a recurring case of cardiomyopathy, a viral infection of the heart.

Newton, 65, had to cancel a two-month engagement at Harrahs and he will not be able to perform on the Nov. 27 finale of Dancing with the Stars, though he should be doing well enough to make an appearance.

"This is just another little bump in the road," Newton, who lost 20-some pounds during his run on Dancing, said. "The doctors are a little more concerned than I am. Part of their concern is that I feel so good—I’m not taking this lightly."

It is difficult to ascertain the type of cardiomyopathy that Mr. Newton suffers from when reporters try to give background to his condition, without really having a clue what they’re talking about. You see there are two types of cardiomyopathy. The first more common form where the heart muscle becomes weakened, dilated, and fails to contract well is called dilated cardiomyopathy. A second, less well-recognized form of cardiomopathy is often a congenital one that causes the heart to thicken so severely that is fails to relax (and therefore fill with blood well) called hypertrophic cardiomyopathy. Either form of heart muscle abnormality can cause the heart to provide insufficient blood to the tissues, the ultimate final common pathway of heart pump failure. My bet, is that Wayne suffers from the more common, dilated form of this heart ailment, especially given the multiple other references in the media suggesting a “viral” cause of his condition.

For Mr. Newton, who has now had two (public) episodes of heart failure, he faces a transition point where the complexities of his condition have begun to interfere with his vocation as an entertainer. It is a difficult period for anyone making this transition. After all for Mr. Newton, entertainment has defined much of his life. But his decision to forego his rigorous schedule and focus on his treatment is a good one. Doctors will adjust his medications (like beta blockers, angiotensin converting enzyme inhibitors or antiotensin receptor blockers, and diuretics) to improve his symptoms, and maybe, just maybe, (dare I say it??) give him an automatic defibrillator, a la Dick Cheney, to protect him against life-threatening, sudden, and unexpected heart rhythm abnormalities. After a two-months recovery, he might be able to return to dancing, perhaps to a scaled back level. And although he might not be “cured,” as the entertainment magazines would like us to believe, he certainly can get back to the business of life.