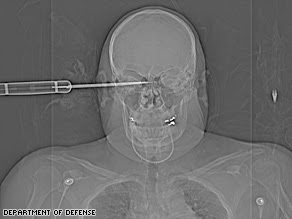 ...to have survived this.

I'm as pro-Navy as they come (after the USMC), but this was an Army Sergeant, treated in a series of Army medical facilities, and transported through the heroism of Army medevac and Air Force long-range transport.

I hope he gets his wish of return to active duty.

"His advice to the team in Iraq: close the sergeant up and get him to the National Naval Hospital in Bethesda, Maryland, immediately.

The non-stop flight from Iraq to the United States took 13 hours.

Once at Bethesda, Powers was rushed into surgery.

The neurosurgical team coiled the carotid artery and performed cranioplasty on Powers' skull. For four days, Powers was in a drug-induced coma. Doctors feared he would wake up with brain damage or blind.

Remarkably, he only had problems with his balance.

Powers spent a month at Bethesda. During that time, he testified via videoconference in the trial of the man who stabbed him."

Allen -
It was a multi-service affair, Army, Air Force, and yes, the Navy, too. ALL did a great job. Thanks for exposing my bias.