I'm in yet another city preparing for another talk to doctors who (reportedly) are interested in my experiences (can you believe?). It's a chance to share experiences - hopefully so others can avoid the difficulties I have encountered during my learning curve doing complicated (and not-so-complicated) pacemaker implantation. Typically, these talks are well-received - in part because you get to show tough cases and the audience can smile politely as if to say, "Better you than me!"

Anyway, I was preparing for this talk and wondered if some of the information might be helpful of interesting to the blog-o-sphere. In addition, if it helps avoid a complication for a patient, then my blog will be worth the work.

I use this technique to find a big vein (called the "axillary vein") in the upper chest area (just beneath the collar bone or "clavicle") where we implant pacemaker and defibrillator leads. I have been impressed at how few doctors use a bit of help for this access. (Some might call this access a "subclavian venous access," but because the access is made lateral to the clavicle, and not beneath it, it is called an "axillary venous" access approach.)

My technique? I cheat.

You see I have come to learn that the anatomic course the axillary and subclavian veins traverse can be quite variable from patient to patient, especially the elderly. And in whom do we place the most pacemakers? The elderly. A colleague of mine exposed me to a new tool to definitively identify the vein: ultrasound. Using sound waves to find the veins can be extremely helpful and expedites access to the veins. Here's what our (older model) machine looks like: 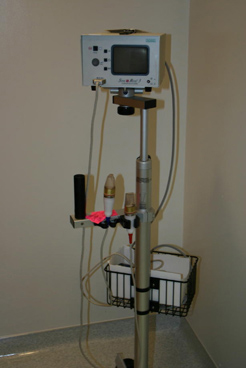 There are two probes that use different frequencies of sound to provide the image at 5.0 and 7.5 MHz. The 7.5 MHz probe has better resolution but poorer penetration in thick tissues (better for internal jugular access). I tend to use the 5.0 MHz probe most often: 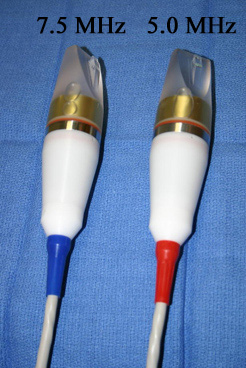 Once the probe is chosen, we place some ultrasound gel into a plastic bag, and then place the selected probe into the plastic bag (ultrasound doess not travel well through air). This gel facilitates imaging of the vein: 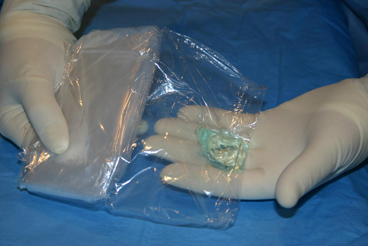 The probe is then placed into the sterile gel-filled plastic bag, and the bag secured onto the probe with little rubber bands: 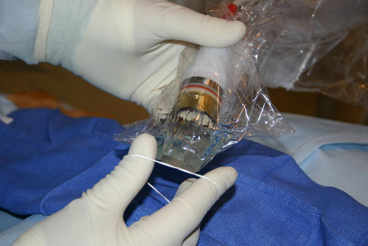 A small amount of sterile gel is applied to the surface of the skin as well, then imaging of the vein and artery performed by moving the probe around beneath the calvicle until two dark echo-lucent vessels are indentified. With the ridged edge of the probe toward the operator, the vein is imaged in the same anatomic relationship as the actual anatomy (A = Artery, V = Vein): 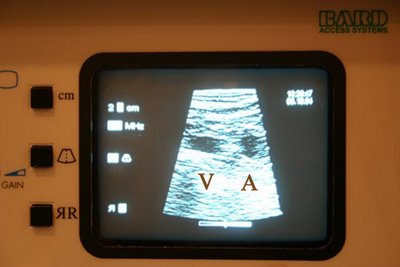 Applying gentle pressure on the skin over the vein compresses the vein but not the artery as seen: 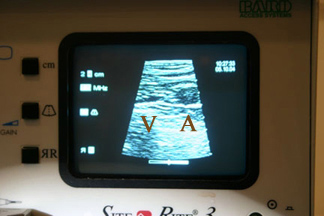 After identifying the vein, imaging during puncture of the vein can be accomplished safely.

I have found this technique has helped improve the safely and efficacy of performing axillary or subclavian vein access (for pacemaker placement or central lines). If you don't have such a machine, you might want to think of getting one. You can learn more about this instrument here. (Note: I have no relationship with the company - just hope this might help someone else like it has helped me and my patients).

Sounds like I'm being grilled here, but here you go:

No. It's all about the pocket. Make it medial and secure the header of the device and no interference with the arm occurs.

No. I don't see why you might think this would CAUSE lead dislodgements.

I typically to individual punctures into the axillary vein as required, whether it's a biventricular device or not. Imaging can be performed for each puncture.

Many of our patients with poor heart function also have compromised renal (kideny) function. Avoiding excess contrast is a very good thing in these cases. This is not to say I never use contrast: I typically shoot a venogram in people with devices already implanted (during device upgrade) to assure the vein is patent prior attempting to pass a lead from the same side as the device.

In ANY tough access case, this device can be helpful.

There you go. Best of luck.