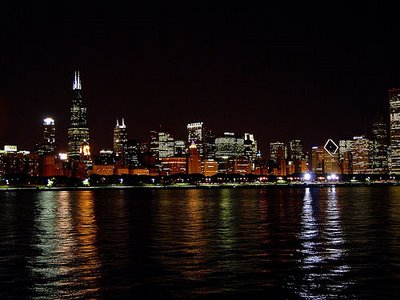 Chicago certainly lived up to its moniker "The Windy City" two nights ago. O'Hare airport was closed to incoming air traffic as sustained winds of 40 MPH lashed our city and gusts to over 55 MPH were seen as our wonderful warm spell gave way to the Arctic blast thoroughly anchoring itself over the city. It's 40 degrees (Fahrenheit) and cloudy right now, but the winds have finally calmed - typical Chicago weather.

But what better venue than this for the American Heart Association's 2006 Annual Scientific Sessions? While fewer and fewer clinical cardiologists tend to attend this meeting, it remains the premiere meeting for basic scientists from around the world to share research interests and meet like-minded cardiovascular researchers in the areas of heart and vascular disease.

I will be attending this meeting later today and have even been invited to host a session tonight - even despite my rant about last year's local chapter meeting. I'll try to see if I can make a post or two about what I learn. It's a great chance to see old friends and learn about some of the latest research in heart disease.

Hope to see you there!