We’ve all had ‘em. No one wants to be one. Anyone in medicine long enough sees a cool case. Here's one of mine:

Years ago as a young electrophysiologist, I was asked to see a patient for consideration of an automatic defibrillator. He was a relatively young 49 year-old man who worked as a roofer and had a one-and-a-half year history of arthritis involving primarily his hands, elbows, and knees. He was treated with non-steroidal anti-inflammatory agents of all varieties without effect. He sought evaluation with a rheumatologist and was thought to have a form of non-rheumatic arthritis as his serologies were non-conclusive. He was eventually placed on a short course of steroids with some improvement, but his symptoms would return when the steroid dose was dropped. He eventually was required Plaquenil, a drug that can also suppress the immune system but served to help with the inflammation of his joints.

He had been in and out of the hospital on several occasions recently for increasing shortness of breath and rapid heart rhythms. His echocardiogram demonstrated a moderate weakening of his heart, and he had a mild elevation of his resting heart rate. His room-air oxygen level was lower than I would have expected. So he was treated with Lasix by the referring physician with some improvement. Because of his fairly poor heart function and rapid heart rhythms, we were consulted to evaluate him.

When I saw him he was short of breath, but able to lie flat with no more shortness of breath than usual. This was unusual for congestive heart failure. The remainder of his examination was only remarkable for bilateral basilar lung rales (crackles),
and the swollen, tender joints.

I examined his chest x-ray. It looked like this: 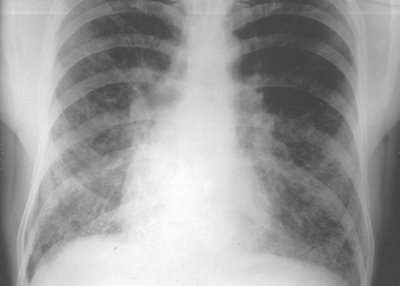 Now the fluffy infiltrative stuff in the lower lungs fields did NOT appear consistent with the usual causes of congestive heart failure that I had seen, so I thought I had better show the film to one of my pulmonary colleagues. He agreed with my interpretation and scheduled a bronchoscopy the next day, but later that day, he began coughing up blood. The procedure was expedited.

It was later that afternoon when the call came. "You're not going to believe this."

And he proceeded to describe his findings on the bronchoscopy. Here's what he saw: 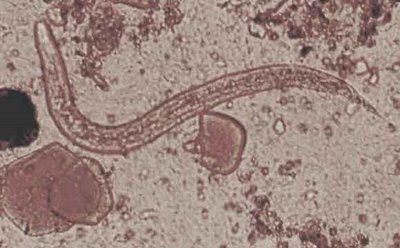 What did he find? (Click comments to see the answer).

Worms. Lots and lots of worms. Stongyloides stercoralis to be exact. An interesting helminth that can penetrate the feet, enter the venous supply and the right heart and lodges in the lung where it is coughed up to the oral cavity, swallowed to enter the feces, replicates, and excreted - all to spread to another lucky recipient. Nasty, huh?

Well this is what this poor guy had. It turns out he was roofing a barn where pigs had been housed during the summer, and had walked through the mud behind the barn in his bare feet each day, exposing him to the worms that entered his skin. He a more disseminated form of the disease called "hyperinfection" because of the immunosuppressants he was treated with for his arthritis.

The happy ending: He received treatment for the worms, and slowly improved. His lung function improved, his arrhythmias improved, and importantly, his arthritis resolved: the arthritis had been caused by the body's immune reaction to the worms.