Should Cardiologists Boycott the 2014 TCT/ACC Conference? 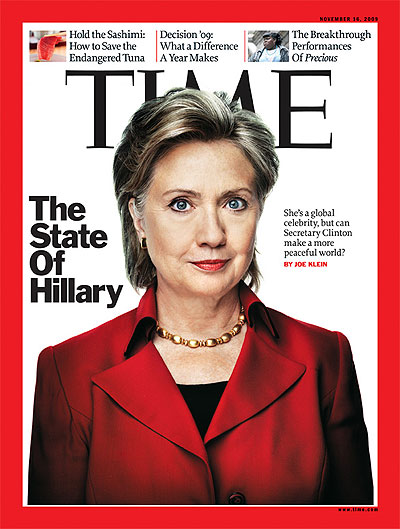 Yesterday, I noticed a tweet from @angioplastyorg announcing that former Secretary of State Hillary Clinton will be this year's keynote speaker at the Transcatheter Therapeutics Conference (TCT) in Washington, DC.  The TCT occurs each year in partnership with the American College of Cardiology.  Most doctors probably won't think much of this, but for many who spend 12 hours or more each day in a dimly lit cathlab , the prospect of sharing the bright wattage of Ms. Clinton radiating down upon them is seductive indeed! And look how the ACC is helping cardiologists: they were able to land the presumptive next President of the United States to speak at their conference!  Can't you just see the event planners giving each other high fives!  Who can beat that?

In reality, most cardiologists couldn't care less about Ms. Clinton.  They'll oversleep or consider her address as nothing more than marketing theater.  But to dismiss Ms. Clinton's presence at this event misses some important considerations.

Is the purpose of the TCT conference to hobnob and aggrandize politicians, especially one who could become President, or is to educate and inform physicians?  Is the purpose of paying Ms. Clinton's hefty speaking fee about gaining her ear, or to make a political contribution from Big Business and the crony capitalism that pervades health care now?   Is the real purpose to of her presence as keynote speaker to address cardiologists real concerns or so that ACC leadership can position their proprietary NCDR databases and "Appropriateness Criteria" as quality metrics to permanently pad their bottom line?  Suddenly, Ms. Clinton's appearance takes on more cardiovascular gravitas.

Every cardiologist sitting in that hall will have just come through a year experiencing less time with their patients, less clinical autonomy, intrusions on their practice, while increasingly being coerced to perform bureaucratic tasks that mean little to patients yet everything to corporate interests.  What do we imagine will, in fact, be addressed by Ms. Clinton as we buy our plane tickets and carefully pack our suitcases? Do we think for one moment that Ms. Clinton or the ACC will have the slightest compunction to address the serious concerns of the cardiology community?  What do we imagine the ACC will address about these concerns in the rest of the meeting?

ACC should wake up to a new reality.  Recall that it was a small group of cardiologists who started the anti-Maintenance of Certification (MOC) petition against the new, more onerous MOC program devised by the privately held American Board of Medical Specialties and the American Board of Internal Medicine.  Over 18,000 doctors of all types have signed that petition now.  In response to that petition, the ACC performed a survey of their member chapters nationwide.  The anti-MOC sentiment from this survey was overwhelming.  Many senior doctors even mentioned it might make them consider early retirement.  In turn, the ACC's response was lukewarm at best.  This was likely because the ACC's history has been to support the lucrative review courses this program requires.  These courses are so important to the ACC's bottom line that they even devoted an entire "MOC Complex" hall at their last scientific session to promote the MOC program and still aggressively market the program on their website.  This is hardly a show of solidarity with their member cardiologists'.

It is time front line cardiologists put action behind their anger over the MOC process and the ACC's indifference.  It is time to consider a boycott of the ACC/TCT meeting in Washington.

To that end, the ACC leadership needs to stop pandering to politicians and corporations eager to profit on doctors and instead start advocating for their own members.  The preeminent assumption in program planning at events such as these appears to be that physicians are passive, apolitical, and unaware.  Why would the ACC or any other physician membership organization feel the need to change?  For this reason, the time to boycott is now.  If the boycott is successful, perhaps the ACC leadership will take the concerns of the member cardiologists' more seriously than the politics of creating public-private partnerships that threaten to compromise, rather than promote, the care of our patients.  Does the ACC really believe they can remain relevant without physician participation?  We should note that alternative professional organizations are beginning to evolve.

Whether the ACC has realized this or not, they are coming to a juncture where they will have to decide whether they represent physicians and their patients or the Iron Triangle.  Physicians are not lawyers, they are uncomfortable acting collectively or politically, much to their detriment in this era of rapidly morphing health care regulation and intrusion.  I can still hope that the ACC and other organizations such as state medical societies will have the capacity to represent the real interests of their physician members.  But increasingly I am concerned they won't.

But we should be clear: physicians' actions mean something.  So this doctor will not be attending this year's meeting because it's one of the only ways I have left to send a message.

I hope others will consider the same.

Wes - Hillary is talking at the TCT conference in Washington DC in September. Not the combined conference with ACC in March. The rest of your comments still apply, however, as MOC is being sold as part of the conference. Interventionalists only, however.

Dear Wes:
Thank you so much for writing what I feel about the ACC. Recently fired from the ACC, Jack Lewin, is now the CEO of CRF who put on TCT. Now that Jack Lewin cratered the ACC, he has moved on to greener pastures with TCT. Lewin is the wrecking ball of cardiology with all his crony buddies lining up at the healthcare trough.

Lewin assisted in the expropriation of my outpatient cath lab, nuclear and echo labs to the hospital who is now my employer and charges 2.5 times as much as I did. This man single handedly destroyed the private practitioner. (He sure did help dermatology reimbursement, though). Somehow, I doubt that his salary has dropped as much as mine.

Regarding the ACC, did you see their future mission as outlined in JACC by their new CEO. The focus is on the PINNACLE registry. Specifically, only 57% of patients are taking anticoagulation with afib. Could it be that the NOACs have something to do with this? Will the ACC turn me over to CMS for a 1% cut in reimbursement if I fail to give Xarelto to my afib patients with GIBs?

ACC claims to be 'focused' on education when they are the de facto regulatory arm of CMS!!

I am shocked that anyone would imply that regulators chose Hilary in order to advance a presumed future contact with a president whose mind is conditioned to the need for even more regulation. Why is someone impugning the sacred nature of the meetings where politics is enthroned, and the divinely appointed masters of our profession? Hilary is a lawyer. so Of course she knows what is good for medicine. She has an office inside the beltway, where all medical wisdom originates.

If a lawyer is to address a meeting of clinicians, that would explain why Wes is going to be the keynote speaker at this year's meeting of the American Bar Association. Wait a minute. He's not? No reciprocity it would seem.

I'm in! Here's MY proposal: If Hillary can speak at the TCT, then I get to demand that lawyers bill like doctors!