A Cardiologist Tests an Activity Tracker

﻿ ﻿ I have been testing the Fitbit One activity tracker (Fitbit.com) over the past several weeks to see how it might help me lose a few pounds.  I'd heard a lot about these things and have friends who use this or other competing devices, so I felt it was time to test one myself.

Simple in design, the Fitbit One looks similar to a small USB memory stick and has a single button on one side of the device and two small gold-colored electrodes on the back of the device that connect to a small USB-based charger that plugs into your computer.  It uses an accelerometer and altimeter to monitor movement counting "steps" and "stairs" climbed or descended.  Using your weight and age provided to the Fitbit website as your starting point, it calculates calories burned, estimated miles walked, and provides a motivational flower icon with a growing "stalk" for the level of activity achieved at different times of the day based on pre-set goals you select for yourself:

﻿
﻿ The device is either placed in a small rubber clip that holds it on a wasteband or bra or it can be placed in a wriststrap that can be worn at night (more on this later).  It should be noted the device is NOT waterproof so it cannot be worn swimming. 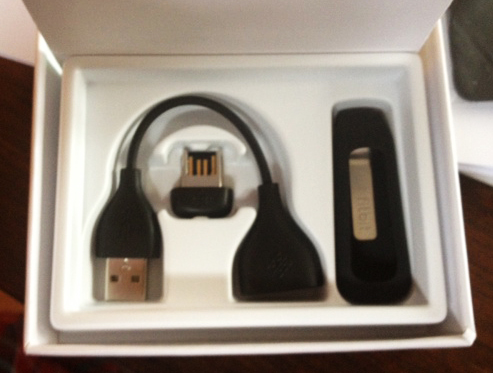 The device comes with a number of tiny attachments that are critical to its function, so keeping these in a safe place is a good idea.  They include the charging cable (one charge worked for 4-5 days for me and it quickly charges in about 60-90 minutes), a USB Bluetooth communicator, the rubber clip-on cover and the wrist strap.

The device communicates effortlessly via Bluetooth to an iPhone 4s or iPhone 5 automatically once a 4-digit unique handshake code is shared by the device and your cellphone.  Information stored on the phone also syncs with a (non-HIPAA compliant) website online where your daily, weekly, and lifetime activity levels, food consumption, and weights are stored.  Viewing data over time is a simple process.

The Fitbit iPhone app is downloaded on to your iPhone and permits you to enter your weight as you progress, food consumed, or to log your activities.  You can also connect with others via the app (something HIPAA rules discourage, but most people using these don't care).  Still, if you want to see how your compare each day to other like-minded souls throughout the day, you can using their iPhone app.  Real gluttons for punishment can even share their achievements using the device on Facebook.  (Sorry, not me.)  While the website can send you "badges" for activity milestones via email or text message on your phone, I preferred to turn off this functionality because I really didn't need to look at my cell phone any more than I already do.  Also, I don't need any more spam.

Interestingly, the Fitbit One can also track your time sleeping.  This is accomplished by pressing and holding down its single button for over 2 seconds until a timer starts.  Pressing the timer for two seconds upon awakening will then record the time slept.  As you sleep, the device reportedly records periods of being "awakened" because it senses motion as you sleep.  (I'll let you use your imagination for other purposes at night as well because, yes, there are interesting stories about this elsewhere).  It also has the ability to set (via your iPhone) a silent alarm that vibrates the device to wake you without waking others near you. 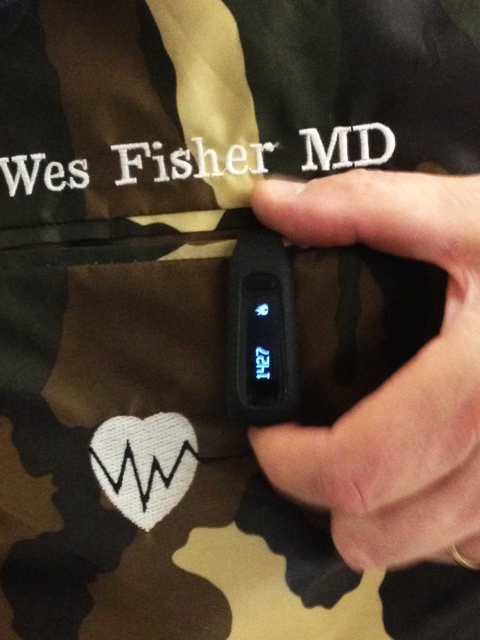 I found there was value in using this device for me.  Fitbit's charm was its way of making even simple exercise like walking and climbing stairs matter.  While I enjoy racquet sports and they provide plenty of steps to achieve my self-imposed daily goal, I found walking the halls of our large hospitals worked pretty well, too.  Also, I found that I didn't have to obsessively track my food intake for too long since it became very obvious that every little thing I consumed quickly added to my daily allotment of calories.  Just understanding what you are eating, paired with your calories burned, was eye opening.  I learned first-hand how much activity it takes to burn off those calories consumed.  Most important, a pacemaker battery change burned about 105 calories.

I tried showing this device to a few of my more stubborn overweight patients in clinic, and they appeared interested, but whether I can convince them to make the plunge will have to come after I test my own ability to stick with the use of the device for a bit longer.  (If I lose weight, will it help me keep it off?)  Also, I found patients hesitated when I disclosed the price for the Fitbit One ($99 US), though a cheaper version called the "Zip" is available for $60 US that tracks fewer items.   Still, given what we pay for monthly cell phone service, this price seemed fairly reasonable over the lifetime that the device is likely to be used.

I worried that I might lose the tiny device and quickly turned to clipping it to a belt loop rather than my belt since it held better there.  And although I haven't had my device go through a wash cycle yet, I'm sure that scenario commonly occurs with this device and would likely destroy it.

Overall, it seems to be helping make weight loss fairly fun so far, though weight loss still requires discipline.  Still, geeks like me have found it's helped so far, aving lost 7 lbs in two weeks using the device.  But I have also come to appreciate what others have noticed using these devices: there is a thin line between healthy and unhealthy obsession with gadgets when using them for weight loss.

Disclaimer: I have no commercial interest in the Fitbit products.

I have used the fitbit for over 2 years to prove to my cardiologist that I am active eventhough I am not doing cardiovascular exercise ( work in food service) I am averaging over 1200 steps a day. I log my daily steps into an excel spreadsheet and take it to every pacemaker visits. this has allowed my EP to adjust my pacemaker and meds to give me a better quality of life. there are several ways I can think of to use the fitbit without obsessing about fitness.

Even cooler, people have already written programs to get the fitbit to integrate with smartwatches (http://augmentedtraffic.wordpress.com/2013/01/06/support-for-fitbit-in-augmented-smartwatch-pro-for-sony-and-metawatch/). With the low-power bluetooth 3.0 and 4.0 standards we are finally getting to the point that our smartphones are now little wireless hubs for all the devices we'll be wearing.

Though with the smartwatches I'd recommend waiting 6 months or so before buying one to see what samsung/apple are up to. The one I own, the Sony Smartwatch, is far from perfect (can't read it in sunlight, doesn't always want to charge, etc.) and the pebble and metawatch still don't have the best software support. Still, having the ability to tell if a phone call is important (ie daycare about your kid) with a quick glance at your wrist is huge when you are with patients or rounding with a team.

Just wanted to add that people have already written software to integrate the fitbit with a variety of smart watches (not a necessary feature, but kind of cool nevertheless if you happen to own a smart watch).