The Pathophysiology of Insurance 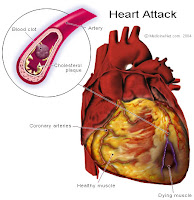 I guess I must have missed something in medical school.

I thought I learned a lot about how a heart attack happens. You know: the “vulnerable plaque,” the “lipid core,” “good cholesterol,” “bad cholesterol,” the “sudden thrombosis” that occurs to obstruct blood flow to a portion of the heart muscle. I realized there was still a lot we didn’t know about how to prevent heart attacks, but smoking cessation, diet and weight loss, beta blockers, “statin” drugs and the like all were integral to help prevent them.

What I never learned was that insurance, especially Medicare insurance, was likely the missing link in the prevention of heart attacks.

Imagine. Universal healthcare insurance has now been irrefutably associated with a reduction in heart attacks.

Thousands of people say so. After all, they completed surveys and are convinced, and I mean, convinced, that they are healthier because of insurance. After all, they’ve seen all the “wellness” ads on television. They’ve seen the smiling faces of those people that seem so happy taking Viagra and playing their guitars. They’ve seen the peaceful Lunesta butterfly flitting across the beds of some beautiful people resting comfortably knowing that fitful sleep is just a mere $142 per month away. They've seen the AARP-endorsed "SecureHorizons" advertisements with smiling seniors feeling so fortunate to have insurance (never mind that AARP receives over 60% of its fees by way of "royalties" from the insurance industry).

So fantastic is insurance at heart attack prevention that the researchers of this important trial never even had to consult a single health record to verify their claims. Not one. From the studies "limitations" section:

"Our study relied on self-reported health measures rather than data from medical records. Although our measure of adverse cardiovascular outcomes summarized related items selected for their face validity, this scale has not been formally evaluated as a measure of cardiovascular disease severity."

And yet it makes more splashy press releases about reducing heart attacks, sponsored in part by the Commonwealth Fund, just in time for the important upcoming election.

Made even splashier when it comes from Brigham and Women's Hospital, Harvard Medical School, the Department of Health Care Policy, the National Bureau of Economic Research and the Department of Health Policy and Management, Harvard School of Public Health, all based in the state that already can’t figure out how to pay for their affordable "universal” insurance: Massachusetts.

And the same plan whose oversight board has approved cuts of 3% to 5% in reimbursements for to health-care providers caring for those in the subsidized plan to balance the budget shortfall.

But maybe these researchers are on to something.

I bet I could find out.

Not only that, but the results section indicated that those who became insured became more mobile and more agile.