Teens look so cool smoking, don't they? Look at them. They look so big, important, sophisticated don't they? Wow. I wish I could be like them. They must have been very cool to have picked up those cigarettes on their own. How did they do that?! Damn that's awesome, dude! It's da bomb. Folks who smoke are the shizzle! You know only really phat kids smoke. Whazzup wit dat? And dis? Oh snap! But like, dude, you seen dis?

What's dat about? Or dis? 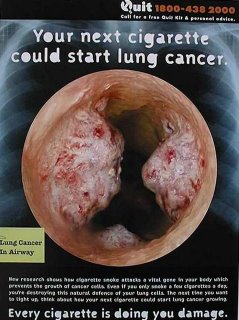 Man, that sucks, dude. I bet your feindin for some cigs right now. 'Specially since in Florida, the cig dudes no longer have to pay all that green to dudes who've died -- oh well, it's just them old dudes anyway - it'll never happen to us. Go ahead, man, light one up, it's da bomb!

After all, teen smoking makes about as much sense as my attempt at teenage idiom.