It was en international doctors' meeting and had been a long morning of running between sessions. The brief break before the late-morning sessions was underway and doctors were streaming into the exhibit hall. The Merck booth was spacious and had a pleasant gentleman wearing a conventional hall uniform with white gloves behind a counter with two ornate large coffee pots and small cups behind the counter. The line of conference-goers stretched some distance, as the bleary-eyed and shoulder-bag-laden attendees waited for their cup of "joe."

And there it was, a sign, prominently displayed at the corner of the counter: 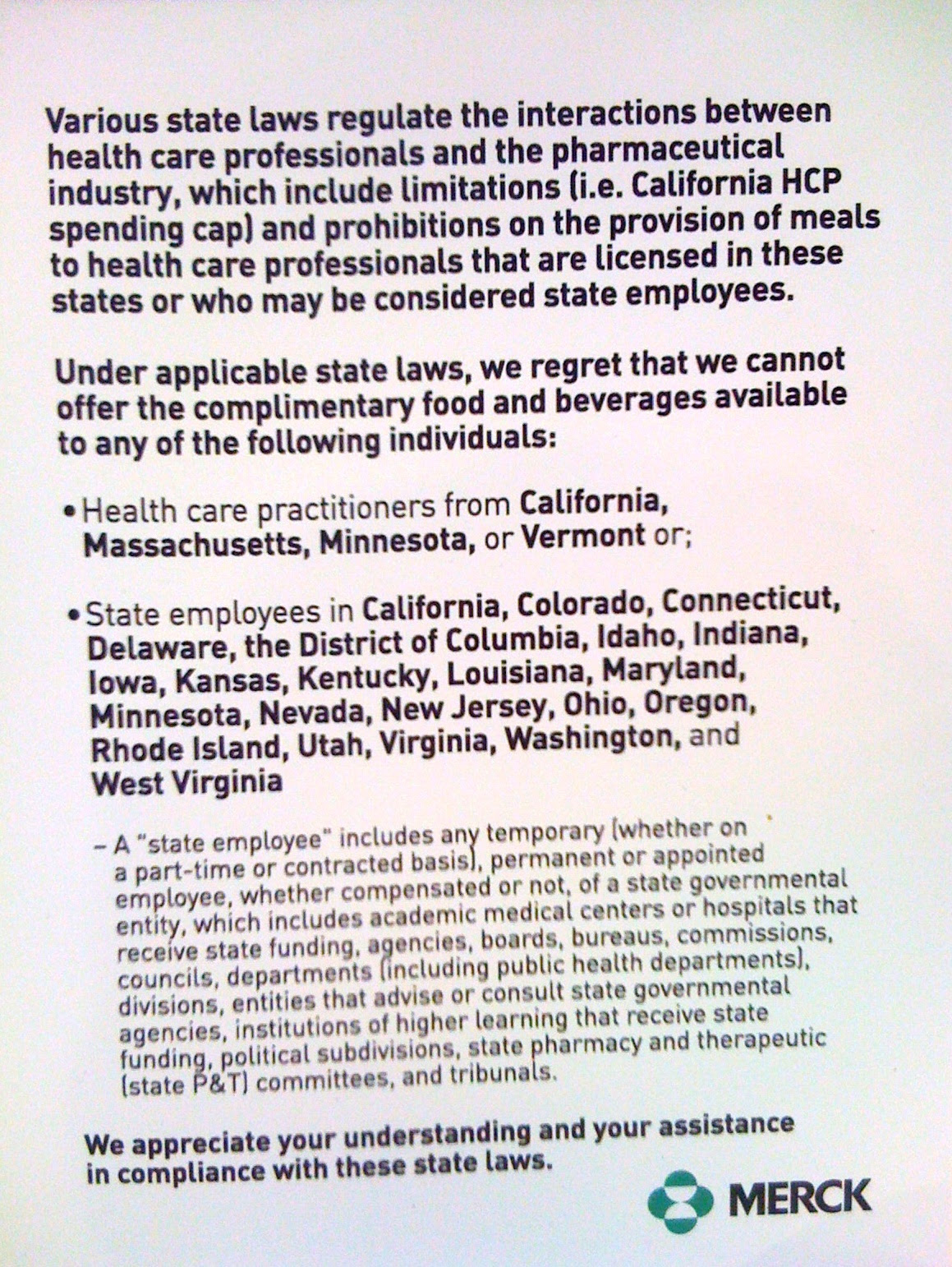 While I never saw the poor guy behind the counter card a doctor who approached his counter, I wondered how this law for physicians from the great states of California, Massachusetts, Minnesota, or Vermont was to be enforced exactly.

At the American College of Rheumatology meeting you have to scan your convention badge to verify you're not from a banned state.

Sure, the law is silly. However, don't underestimate an amiable salesperson, a comfy chair, and a lovely cuppa tea. I remember going to a very nice luncheon given by a drug company for a bunch of health care providers. Afterwards, we listened to a pitch on their brands vs generics. My sister-in-law (a PA in a GYN/OB practice) had invited me. On our way home, we had our own interesting discussion. She felt brand names were always preferable to a generic. Now I'm not saying she was easily persuaded by a filet and I'm probably a sanctimonius prig, but that lunch had a bit of a bitter aftertaste.

Of course it's nothing but smoke and mirrors. Laws regulating the medical and legal "professions" are there to protect their monopolies, not to protect the public.

Certification in law and medicine needs to be abolished in the interests of the consumer.

All of us in healthcare have to self-police. Rumor had it that those over at Seprxxxx were notorious for having "special invite-only" functions. Some were even on cruise ships and golf resorts.

But my dept. chief always had a saying just in case we weren't sure when we had crossed the line..."Accept the cookies, not the cruises."

Although I have to say, it would have been nice to take a cruise and get away from all this ice/snow.

BTW Dr. Wes - I put you on my blogroll. Hope that was okay.