On Time, Technology, and The War of the Worlds 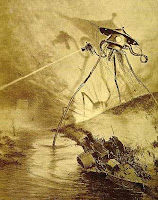 It seems so sudden, this shortening of the days.

It is dark now where it was once light, yet the days remain fixed at 24 hours. You reflect, and think about time: time for light, time for leisure, time for family, and time for work.

Time for doctors is the incessant foot soldier, marching relentlessly as one day moves to the next. Increasingly, doctors (especially proceduralists like myself) are compensated, in part, based on productivity. Such a model is limited by the time available, by its vary nature. So in order to remain income-neutral as insurance payments have dwindled, doctors historically have been pressed to do more in less time. In most instances we have managed, but the margins for doing more within the same fixed 24 hours of time has reached its limits.

Consequently, I wonder what my profession will look like in five or ten years.

It is interesting to see the promotion of atrial fibrillation ablation and cardiac resynchronization devices for heart failure begin to take the forefront of cardiac electrophysiology. But these more complicated procedures also take much more time to perform than a comparable catheter ablation procedure for supraventricular tachycardia or a standard pacemaker for heart block. Not surprisingly and likely in large part due to the push by government payers to limit expenditures to proceduralists like myself, a serious discussion is now being had across the country by subspecialists: offer more complicated procedures which pay much less per hour spent, or funnel these cases to specialized centers in favor of cherry-picking the simpler procedures.

Such a strategy also plays into the hand of high-tech developers in my field nicely. Increasingly, we have seen a large marketing push to promote either the stiff-cathetered Hansen Medical steerable sheath in the heart or blood vessels, or the spaghetti-noodle-soft catheter of the Stereotaxis system which is steered within the heart using a super-magnet and driver motor. But what I have been noticed is these technologies have not launched to the level I would have expected if they had delivered a true paradigm shift to the way we ablate arrhythmias.

While these technologies are fascinating and make for great promotional material for hospitals, they address a problem few electrophysiologists feel they have a problem with: steering a catheter. Unlike the 3-D mapping systems like Biosense Webster's Carto system, or St. Jude's Ensight system that help us understand the anatomy and physiology of arrhythmia processes (and therefore have value-added benefit to the electrophysiologist), catheter-moving robotic technology has so far added little to the ability of electrophysiologists to correct the underlying rhythms being treated. Additionally, cost has been a barrier to market entry, with Hansen's system costing somewhere in the neighborhood of $600,000 US and, Stereotaxis's system costing significantly more since special construction and non-magnetic equipment is required to install their system.

But there's still a more pressing barrier to entry for these technologies now: time.

These devices take time to set up, time to train personnel, time to wait for the anesthesiologist, time to move the other non-robotic catheters used in the case, and more time to move the robotic catheter from point A to point B. As such, they have not yet delivered on the promise to be more efficacious or expeditious than our manual ablation techniques. They have not simplified our complicated procedures but rather complicated them.

This is not to say that ablation cannot be performed with these robotic systems. Certainly they can. But to the average electrophysiologist interested in getting their work done well and getting home in time to see their kids before bedtime, or to the hospital administrator interested in increasing their productivity in an existing lab, these devices have yet to deliver improved efficiencies or effectiveness compared to manual procedures. I even heard one hospital administrator snicker that they're aware of more than one specially-constructed laboratory sitting idle as doctors resist its use in favor of a conventional facility. Does this mean for doctors whose hospitals purchase these systems that they'll be forced to used them? Will the companies push Medicare to developing a reimbursement code to that there will be an economic incentive to use them?

In H.G. Well's War of the Worlds, a simple, unappreciated bacterium ultimately destroys invading powerful alien creatures that arrive in London. For these robotic catheter-driving technologies, time, especially procedural time, has become the simple under-appreciated bacterium that might affect their survival as well. While any new technology carries a learning curve, unless they offer improved time or outcome efficiencies, they will be bypassed for more conventional approaches. What is clear, is that few hospital administrators will want to purchase them if they're just doing to store these expensive technologies in a closet.

The same can be said for EMR software. It has to improve quality and efficiency. If it only does one or the other it's an uphill battle. It it does neither; it's doomed to failure. It sounds like some of the new technologies fall into the latter category. Incidently Wes, an electrophysiologist was featured on TV the other night converting (eletrically) Gene Simmons out of afib with rapid response. Ian.

I suspect that if these new devices truly were advances in terms of patient outcomes, then docs would flock to them, time or no. But when something is just new, and nothing better, then the only ones benefitting from the additional time spent are the manufacturers. Unfortunately, it is these folks and others with large financial interests who are increasingly influencing the way we practice healthcare.

I hate the loss of summer's light, BTW, and dread the day we turn the clocks back.

Your point about Hansen's system stiffness is 100% correct. When I played with the Sensei-Artisan, it was compliant if it is not bent too radically. But it becomes rather stiff if you put it through a tight radius. So that is problematic and their so called Intellisense is considered not useful and turned off according to the few useers I have talked to. It does however fit off the shelf catheters smaller than 8F. Stereotaxis is also not ready for prime time as Biosense still hasn't provided a magnetic irrigated catheter that doesn't char. Their automapping capability is interesting though and it will be interesting to me once again if Biosense can come up with a less char prone magnetic irrigated catheter.

Off topic (a little): What is the current state of investigation of the treatment of scar-generated VT?

Europe just recently cleared the J&J magnetic irrigated catheter so you should be far behind in the states. It's going through a testing phase now before everyone can get it.

Apparently Dr. Pappone has gone through dozens of these catheters in procedures the past few weeks and according to a Stereotaxis press release, called them excellent which is a lot of progress from Boston Afib.

Next I believe the company will then roll out the next set of catheters to 11 more sites. Utilization of the Niobes went from on average 1 per week to 5 with the irrigateds, even before the fix of the char issues.

For disclosure, Carlo Pappone, MD, PhD is on the medical advisory board of Stereotaxis, Inc.

That's a good point and obviously something for people to keep in mind before any non-sponsored clinical data rolls out, but those who followed his comments in Boston would know that he was less than excited with Johnson and Johnson's work.

In other news, looks like Medtronic took out CyroCath today...

A patient died during a Hansen procedure from atrial perforation. The medical device report was recently made public by the FDA.