The New York Times has an interesting piece in their Business section today on implantable cardiac defibrillators (ICDs), but paints a remarkably pessimistic view of the future market for the devices. While I do not argue with the fact that ICD implants nationally have declined, I think it's relatively important to compare the cost of ICDs relative to other therapies we dispense in medicine relative to their life-saving value to our healthcare system.

Although admittedly assembled by Medtronic (who has a vested interest in promoting ICD therapy and yes, I suppose I do, too), there are data of the costs of ICDs relative to other preventative therapies doctors provide as "prevention." Here's a slide from them that adds perspective: 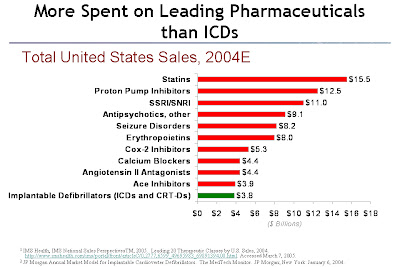 Additionally, although the SCD-HeFT trial demonstrated that 15 patients were needed to be treated before a life was saved, other trials demonstrated a significantly better odds at saving a life: 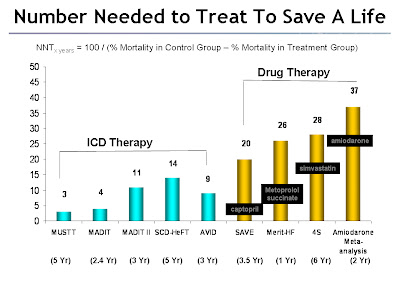 Finally, in terms of cost of other preventative therapies that our society has deemed useful to save a life, I always appreciated this view: 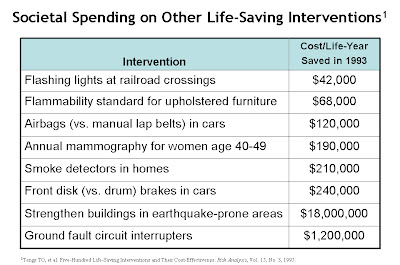 Just trying to keep it in perspective.

It seems to me that if NNT is assumed to be 10, then cost per life saved is 500,000 (the procedure is said to cost 50,000.But how do you calculate cost per life year saved? Or Am I completely wrong?

But most pts with ICDs will have the ICD, be on a statin, an ARB or ACE-I, possibly a CCB and a PPI.
While we call it prevention for SCD, these pts already have serious health issues and use up a lot of resources before we even give then ICDs.