People associate doctors with many things, but by far and away the most commonly associated objects with doctors are...

Needles have lots of uses from (1) removing fluid or small bits of tissue from locations within the body or beneath the skin, (2) injecting medicines or fluids beneath the skin or directly into the vascular system, or (3) poking holes in things to permit passage of slightly larger plastic tubes over them. They are sized by "gauge" sizes - usually larger numbers mean smaller diameters.

But what many don't know is the relationship between doctors' specialties is directly correlated to the type and size of needle they use.

The Dermatologist - Even though they work on the largest organ of the body, it seems everything's smaller in dermatology: warts, skin tags, basal cells. And they don't like scars. Resecting these takes a little local anesthetic delivered by, you guessed it, tiny 25-gauge needles, shown here: 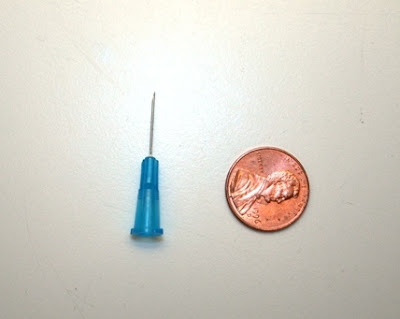 The Pediatrician or Oncologist - These guys have a knack for flare, but they're still dealing with tiny veins, so they've devised the cutest of the needles called the "butterfly" needle: 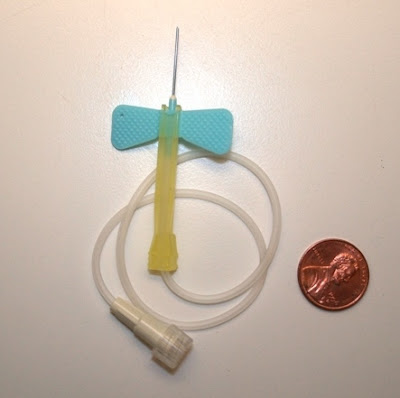 The Internist - Nothing can be simple for internists, so the "Angiocath IV" was invented. It's a smaller needle with a thin plastic tapered tube over it that follows the needle into the vein, provided, of course, this doctor was trained earlier by a really good nurse. Otherwise, the plastic tube will rest outside the vein and permit intravenous (IV) fluids to be poured into the space beneath the skin, swelling the hand to the size of a small softball. So placing intravenous catheters ("IVs") takes a moderate amount of skill and a steady hand: 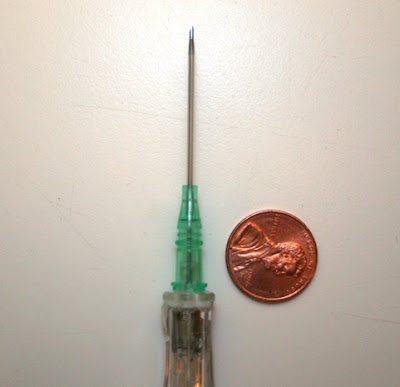 The Orthopedist - All it takes is a strong arm, a heavy hand, and just about any orifice in the body can be reached by an orthopod with this thicker, sturdy, 18 gauge needle: 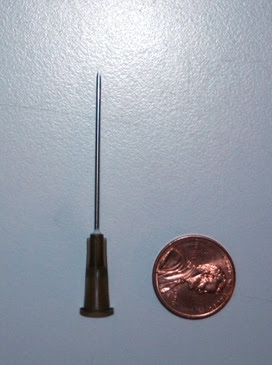 The Cardiologist - By far and away, the workhorse needle is the Cook or Seldinger needle. It's also 18 gauge, but it's longer length helps reach the femoral artery in the upper leg region. (Yes, the othopedist could reach this with his shorter needle, but cardiologists don't like to push so hard). This needle's thinner wall and larger diameter permits passage of a thin wire within the lumen of the needle into the artery. The needle is then removed and a short plastic straw-like structure (called a "sheath") can be passed over the wire into the artery. For such a novel task, it has a strong, commanding look: 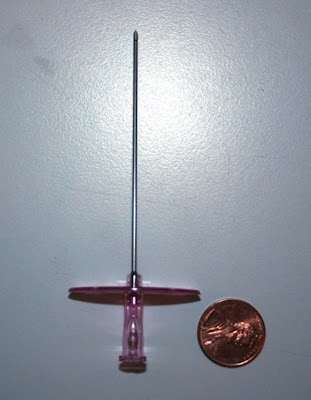 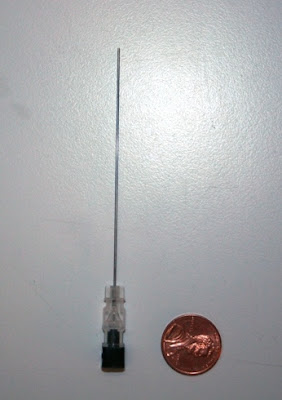 Great post and really informative. I prefer the smallest gauge needle possible to get the job done. 18 gauge...ouch. I am picturing you, Dr. Wes, with your penny and camera.

Hilarious!! I was waiting for the punch line.


But Dr Wes, You know that girth is much more important than length.

I get stuck twice a week with a nice 17g plasmaphoresis needle >).

Very entertaining, thanks.
HH beat me to the punchline with the girth/length comparison. I figured ED docs would win with the intraosseous trocars. Then you cardiology guys still win out with the Cordis catheters.
Dang it.

Sorry, but a question for you. How do you feel about the very recent suggestion of a hole in the heart causing to migraines? Could you do a post about that? I didn't see anywhere to email my question. I assume that you don't want to dispense medical advice and so don't publish your email adddy. I was just curious as to your opinion.

I have to go with the Happy Hospitalist here and remind you that girth IS more important than length. I mostly make the point because, as a pediatric oncologist who does BONE MARROW HARVESTS, I use the needle with the largest girth. After all, my needle has to penetrate the iliac crest and be thick enough to not bend AND to allow the withdrawal of bone marrow from said pelvic bone.

So yours may be longer, but mine is thicker! :)

I sense some defensiveness....

This may sound odd to all of you in the US, but I haven't seen an orthopedist handling a needle except to get a bone biopsy or for vertebroplasty - which uses a long & thick needle. What do the Orthopedists in the US use needles for?

Clearly you have not been around enough Oncologists to know that the most common needle we use is the Jimshadi bone marrow biopsy needle - which is both long and think and come in an extra long version.

Hope you don't mind, I borrowed that picture for an angiocath rant I wrote in my own blog :)

I stumbled across your post while digging around (in this case, a BAD idea) into what an 18 gauge needle looked like. I have to have a liver biopsy tomorrow - now you know why it was a bad idea...

Don't the trauma bay folks use 14 gauge needles for resuscitation? Yours may be longer, but theirs is thicker.

Did we forget the nephrologists' 13 french dialysis catheter?