File this under "What Will They Think of Next?"

For many individuals suffering from severe leakage of the mitral valve (mitral insufficiency) secondary to an enlarged left ventricle (dilated cardiomyopathy), surgical options are limited, especially in the setting of an individual with reduced left ventricular function. Repairing or replacing mitral valves in this setting risks exposing the left ventricle to increased wall stress following the repair with further dilation of the ventricular pumping chamber, leading to the rapid development of refractory heart failure.

So it is with interest that I noticed a new experimental technology introduced to our group yesterday which is about to begin clinical trials at our institution. This device uses a minimally invasive, percutaneous pericardial approach that applies a device that squeezes together the left ventricular walls beneath the mitral leaflets and maintains this force by way of a subvalvular cord passed through the heart walls and held on place by two epicardial pads on the outside surface of the heart. It is hoped that this technology would improve mitral valve closure while limiting the progressive dilation of the left ventricle.

The iCoapsys device is manufactured by Myocor, Inc of Maple Grove, Minnesota. It is percutaneously installed through a small incision beneath the lower portion of the sternum via the pericardial space. As such, prior open heart surgery would be a contraindication to implantation of this device due to scaring inherent to the pericarial area following surgery that would preclude easy installation of the device. iCoapsys it is a later generation version of their Coapsys device that can be installed during open heart surgery.

So for all the techies out there, here's a brief overview of this device:

How Is It Implanted?

First, a small puncture is made just beneath the lower border of the sternum using a special tool to enter the pericardial sac that lies over the heart: 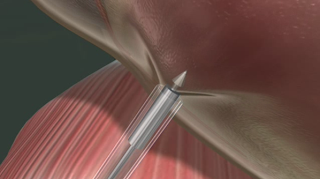 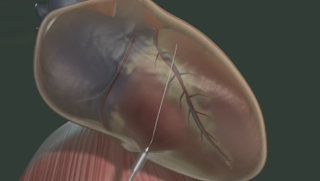 Then,a larger dilator and sheath are passed over the guidewire into the pericardial space. 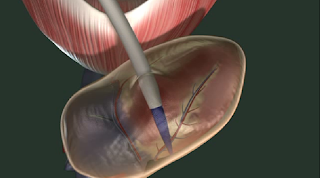 Other catheters are placed through the large staging sheath: 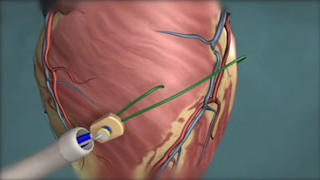 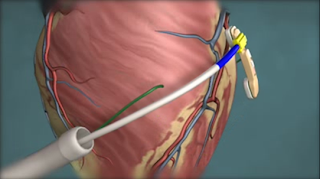 The anterior pad is placed over the alternate catheter: 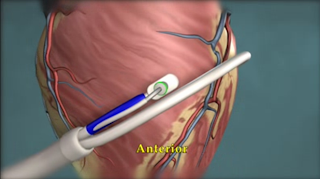 The two are aligned in the proper location using fluoroscopy and a special fluoroscopic "targeting" tool. A puncture of the left ventricle is performed and a wire enters the left ventricular chamber which is snared by a basket snare entering from the anterior approach: 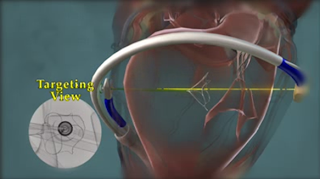 Once snared, the cord is drawn taught until mitral insufficiency is diminished and left ventricular function can be assessed: 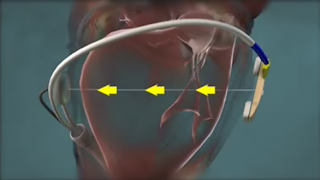 Once deployed, the percutaneous equipment is removed: 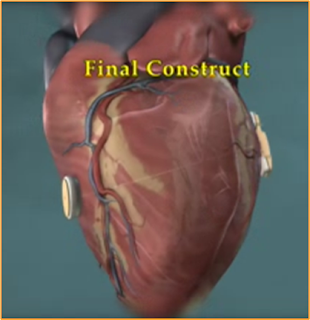 Now, the feasibility trial of this minimally invasive approach is about to get underway by Dr. Ted Feldman, who is the principle investigator at Evanston Northwestern Healthcare here in Chicago. Whether this works or not is uncertain, especially since the cord is likely to tether a portion of the right ventricle as well (and might restrict proper right ventricular function), but the approach heralds a whole new array of pericardial innovations for the heart that are soon to appear on the horizon.

maybe they should work on an epicardial lead placement system as well.

I think this is already being done in select cases experimentally - but there are significant differences in the implant technique (e.g., where to place the device - subxyphoid vs infraclavicular, or how to avoid the coronaries, for instance) that will require docs to gain a whole new set of skills that add to the anxiety "pucker factor" with this technique. Hence, will it really catch on or be reserved for just for specialty centers?

How easy is it to uneventfully enter the pericardial space in someone who has a normal amount of pericardial fluid?

What size sheaths are we talking about here?

One of the interesting features is the trocar assembly that enters the pericardial space without injuring the myocardium that also accommodates a guidewire. Early experience suggests this tool is quite effective and safe when tested in animals and cadavers.

More info: that sheath (or maybe a better word is "tube") is 50 Fr (about 1 inch in diameter). Remember, though, this sheath is NOT in the vascular space.