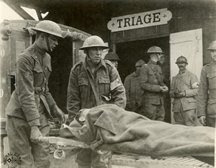 Triage
Pronunciation: trE-'äzh, 'trE-"
Function: noun
1: the sorting of and allocation of treatment to patients and especially battle and disaster victims according to a system of priorities designed to maximize the number of survivors.

– from the French word “trier” – “to pick, cull” with some convergence from the Latin “tria,” or “three.” In World War I, it was adopted for the sorting of wounded soldiers into three groups according to the severity of their injuries. It is a term commonly used in emergency rooms, on battlefields and at disaster sites when limited medical sources must be allocated.

If we think of our national health care funding resources as limited, then should we invoke a philosophy of triage of those resources - that is, distribute these resources to do the most good for the most people?

Ms. S. was a frail 92 year old woman with a long history of Alzheimer’s dementia who had been confined to a nursing home for the past five years. She presented to the Emergency Room after caregivers at the Nursing Home noticed her collapse suddenly to the floor, striking her forehead on the night table creating a large laceration above her eye. She was unconscious briefly, yet awoke several seconds later, unaware of what had just transpired. She had been fine and talkative just before the event.

Her examination, aside from her baseline confusion, disorientation, and laceration disclosed no clues as to the origin of the event. A quick review of her medications disclosed no blood pressure lowering medications, and her blood work was otherwise normal. Her compulsory CT of the head and neck fortunately disclosed no significant neck or head pathology.

An extensive workup was underway: echocardiogram to “rule out“ critical aortic stenosis, bilateral carotid ultrasounds to make sure no significant blockages existed to the blood flow to her brain, and telemetry monitoring.

Seeing her, I knew we’d be asked for the inevitable: a pacemaker. While the etiology of her sudden loss of consciousness and fall will likely never reach a conclusive end with her admission, the prior EKG’s of atrial fibrillation that now has restored to normal rhythm after all of these years suggests one possibility for her collapse: an abnormal sinus node (or pacemaker cells in her heart). Atrial fibrillation that suddenly stops after years of activity is rare, but is often followed by a long period of asystole (no heart beat) before the normal sinus beat resumes. This asystole deprives the brain of oxygen-rich blood for the brief instant and precipitates the loss of consciousness, resulting in her fall. It is quite possible that when her heart beat finally did recover, she awakened back to her remarkably confused and disoriented world. Admittedly this sequence was all conjecture, but after seeing this scenario in several other similar circumstances, I suspected this was what happened.

So how to proceed?

It was clear that discussing this with Ms. S. was an exercise in futility. Her next-of-kin would have to be contacted. They, now, get to make the tough decision: does their elderly mother get a pacemaker? Certainly to have one will prevent further falls. To not have one now would spare her the minor surgery to implant the device. If the procedure were done, it would have to be performed with anesthesia assistance to assure she hold still long enough to implant the device safely. Risks, although small, are real. Costs, unfortunately, spiral. The patient will forever be unaware, except to awaken with a sore chest wall. Ms. S. will return to her nursing home. And after "curing" her cause of the fall, we’ll all feel good – another life saved.

Now as physicians, we are taught “primum non nocere” – first do no harm. But the decision process that follows quickly becomes a comedy of errors: families feel obligated to say "yes" to approve a procedure often for ridiculous reasons - some of guilt, perhaps fear of death, compulsion or misguided responsibilities to their loved one. So, too, are doctors pushed to say "yes" to the procedure for reasons of liability concerns and political correctness. Certainly, it is far easier (an more financially rewarding for the physician) to deliver care than to withhold it. Everyone says "yes" with at least the comfort that they're doing no harm.

Yet there is harm being done in terms of ever escalating costs of health care delivery. Health insurance already out of reach for many, and the problem is likely to grow in severity over the years to come, irrespective of policies developed by various health care policy wonks. So, too, is there the potential for harm and discomfort from the procedure itself - especially in an individual incapable of comprehending what will occur. Often, the recipients of our beneficence are left confused, befuddled, and unhappy. Does the patient consider themselves "better" in such circumstances?

So how do we wrestle with these issues of costs and end-of-life care for the elderly? Do we triage resources, reserving these invasive and expensive procedures for the more intellectually or physically viable patients? Or should the sanctity of life be held above any other consideration like the quality of life? Who should decide what "quality" entails?

Few physicians I know would subject themselves to the potential liability concerns generated by withholding care in such a circumstance unless carefully considered with the family and documented in the patient's record. Older readers may faintly remember saner, less technical times when these decisions were not an issue. It was simpler and more direct then. Families and doctors trusted each other enough to conclude it was their loved one's "time" without fears of retribution or judgement. But with the advance of technology, the ever-present drum beat of marketing a prolonged life, it becomes increasingly difficult for individuals to consider less aggressive options for end-of-life care. With such forces, most true thoughtful discussion of allocating our precious health care resources is forestalled.

So get ready. Think about creating your own living will. After all, with the advances in healthcare today, Ms. S. could be you in a few years ... provided our health care system still has enough funding to have this debate when you get to be that old.

Being a cancer patient with Long QT Syndrome, I wonder if the family ever considers that when a loved one dies of sudden cardiac death it is a relatively dignified and painless death.

Putting a pacer in this patient won't prevent her falls. IF this fall was cardiac in nature, it would help in preventing future cardica falls. But it won't keep her from falling. We all fall, and gravity just hates old people.

What it will do is make every single fall a ?did the pacer malfunction? case, each sent to the ED, each generating a call to the cardiologist, frequent pacer interrogations, etc. And the costs keep adding up.