Sometimes you have moments when you are reaffirmed that you have one of the coolest jobs in the world.

Atrial fibrillation is a remarkably common heart rhythm disorder that effects many, many individuals. For many a cardiologist, it can be remarkably frustrating to treat, since our drugs are often ineffective or toxic. Patients feel a wide range of symptoms: some feel nothing while others are debilitated by the irregularity or rapid heart rates that can accompany this arrhythmia.

I have posted on this before and interested readers can review the methods (and risks) of how I perform this procedure using a "wide area" catheter ablation technique here. On occassion, however, even after performing a catheter ablation procedure (also called a "pulmonary vein isolation procedure") for atrial fibrillation, patients have to undergo a re-do procedure in an attempt to assure that no residual connections between the pulmonary veins and the left atrium have become re-established and re-initiated the person's atrial fibrillation.

The above figure is an example of recordings taken on a re-do ablation procedure in a patient with recurrent symptoms despite a prior atrial fibrillation ablation procedure. The signals were recorded come from a series of catheters (wires) in the heart as shown: 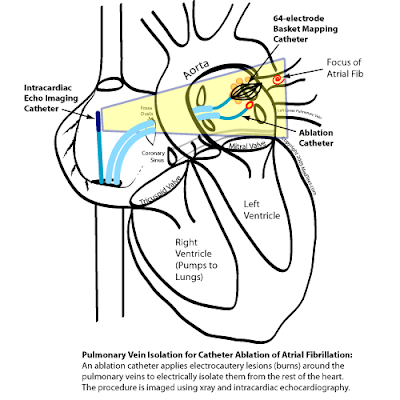 The "basket catheter" is actually an 8-splined catheter with 8 electrodes per spline and is shown here:

Now, with all of those wires in the heart, we can record signals from all of them simultaneously and display them on a computer. An example of the recordings taken from all of these wires is shown here (click to enlarge): 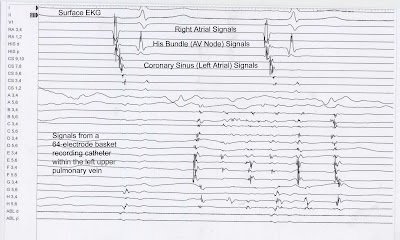 Now, most of my cardiology colleagues get glassy-eyed when they see these tracings. But for the electrophysiologist, they can be heaven! Here's what this series of tracings shows:


While we were happy to find this during our repeat ablation procedure, we mapped the other pulmonary veins and discovered the right upper pulmonary vein had re-established an electrical connection. Isolating that pulmonary vein rendered this patient arrhythmia-free.

Man, you gotta love this job!

View from the Trekant said...

"Now, most of my cardiology colleagues get glassy-eyed when they see these tracings."

Sad but true. We rarely get to see a good EP case at our weekly cardiac case conference. The surgeons actually boo when they see EP tracings!

As a cardiology fellow I was in on a successful WPW ablation. I felt a light go on when it was clear that there was no more pre-excitation. Cool! But I can't sit in a procedure for 3 (or 5 or 7) hours the way you guys do.

EP is the endurance sport of cardiology.