This past week, the American Board of Internal Medicine sent this reminder to all ABIM Board-certified diplomates participating in Maintenance of Certification (MOC™) (thanks @jtsaxon for sending this): 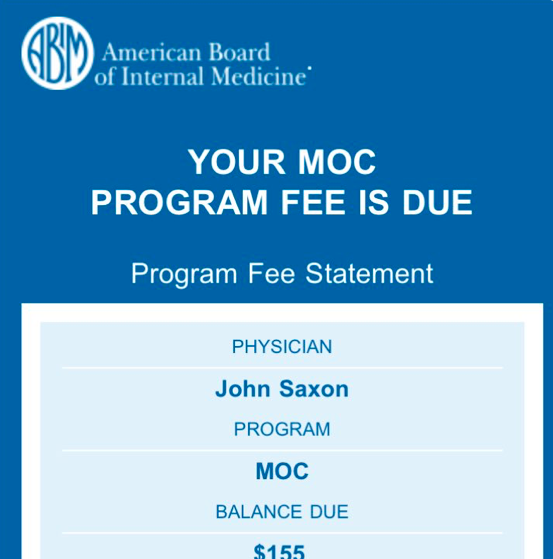 Before paying this fee, please take a moment and re-read this classic post from Robert Wachter, MD from 14 August 2012 that he placed on his former industry-sponsored blog, Wachter's World. The post is titled "On Becoming Chair and Why the Boards Matter More Than Ever."

Be sure to read the comments included, all 95 pages of them (or at least a good portion of them). (They have been saved to my server in case Dr. Wachter and his industry companions want to wipe the internet archive, too.)

Wachter's World no longer exists because it was pulled from the internet in 2016 because Dr. Wachter's company, IPC Hospitalist Company, had to settle claims filed by a whistleblower and the DOJ for "up-billing" Medicare under the False Claims Act.

What "matters more than ever" is your decision.