The Vanishing Oath: A Review 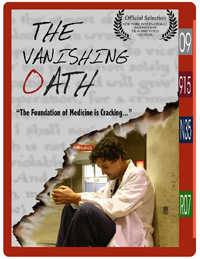 As background, the film is a three-year project born in 2007 just before the great US health care reform debate began. Over 200 hours of interviews were conducted explore a simple question: why Dr. Flesher had grown to hate medicine.

It would have been easy for Dr. Flesher and Ms. Pando to make his story nothing but a rant, but instead, we find that their story is an honest attempt to understand how someone so enthusiastic at the start of their training could become so quickly discontented with the realities of emergency room care and our bloated health care delivery system.

To understand the origin of his disillusionment, we journey with Dr. Flesher and Ms. Pando as they return to interview people on the street, his family, fellow medical students, mentors, scholars, colleagues and plantiff's attorneys. They attempt to interview many of the many "vested interests" involved in our current health care system, including:

Of those that responded to their requests for an interview, all wanted to see the questions beforehand. Ultimately, none of them opted to go on record in the making of this film.

The viewer is left to wonder why.

Still, they manage to gather a few insightful interviews from those with health care administrative backgrounds. More importantly, we quickly realize that Dr. Flesher is not alone. The same forces that shaped his discontent are revealed in fourth year medical students unsure what lies ahead for them and in the colleagues he turned to during fellowship training. We are introduced to a young aspiring hand surgeon who left (video clip) medicine after all of his years of training because of the toll it took on himself and his family. The footage is powerful. The people and emotions, real.

Suddenly, the viewer is confronted with the reality of how our health care system has grown to affect doctors. Worse, we realize what this might mean to each of us.

Additionally we see, firsthand, the effects that the fear of malpractice has on doctors and their behaviors. More to the point, we hear (video clip) from several doctors who had been sued and are even ushered into the office of an anonymous doctor in the midst of a suit at the time. Only later, and contained in a separate clip contained on the film's DVD, do we learn that the anonymous doctor interviewed was doctor Robert P. Lindeman, MD, the no-longer anonymous physician blogger former known as "Flea" as he was being tried in court just before he was unmasked on the stand by the prosecuting attorney. (A remarkably insightful follow-up interview with Dr. Lindeman a year and a half after his trial was settled is included on the film's DVD and is especially humbling. For instance, in the follow-up interview we learn that his medical malpractice rates increased 40% for the "settlement.")

In the end, we aren't quite sure if Dr. Flesher decides to return to medicine or not. You'll have to see the film to draw your own conclusion.

At times I felt the film leaned too heavily on the question of why doctors are unhappy at the expense of other critical health care issues. After all, not everything in medicine hinges upon whether doctors are unhappy or not, and that question is probably the least important to the public at large. Still, the issues of physician burnout and attrition, coupled with our ever-burgeoning health care bureaucracy and the loss of physician autonomy, will no doubt continue to affect the recruitment of future generations of physicians and perhaps the caliber of doctors in the future.

Nonetheless, both Dr. Flesher and Ms. Pando are to be congratulated for their bravery and fortitude at completing this documentary. It's a raw, unapologetic look behind the curtain of our current health care system from a physician's point of view. To my knowledge, this is the first time a doctor has used the creative venue of film to so vividly document the challenges we face.

Let's hope it's not the last.

Disclaimer: I purchased the film for this review and have no conflicts of interest with the film team or production company.

That bit of careless blogging, by Dr. Lindeman, turned out to be very expensive. If that trial could have ran it's course, he may have won. If so, he would have not suffered such an increase in MedMal ins..

The healthcare system may be a big place with lots of things going on besides physicians' services, but physicians are a critical piece of the puzzle as well.

There should be no shame in loudly decrying those forces that have the potential to reduce Americans' access to physician in the future by way of reducing the number and engagement of physicians.

Even the former heads of CMS acknowledge that physicians have had their legitimate concerns ignored. Framed properly, these arguments can be made much more loudly without fear of alienating the public.

He admits as much in his follow-up interview.

First time visiting your blog and I have to say it is a surprise to see a documentary that addresses the consequences that "reform" will have on the day to day work that we physicians and physicians-in-training do. Very "Ayn Rand".

Physicians have been forced into a very uncomfortable corner with respect to how they are allowed to practice, then they are reviled when they dare complain about their discomfort.

If any other industry was forced by law to submit to such conditions, we would have seen strikes years ago.

keep up the good posts, and feel free to check out my blog at www.turnyourheadandcoughMD.blogspot.com

Nice review, Wes. I need to see this ASAP. So amazing that the listed parties refused to be interviewed. So much posturing. Time to get real about the issues facing medicine.

"not everything in medicine hinges upon whether doctors are unhappy or not, and that question is probably the least important to the public at large"

I'm anxious to see the whole film after looking at clips. BTW there is another doctor produced film
at www.ouralinghealthcare.com
I highly recommend this one too...

I don’t know, medicine does have some really sucky moments, but unless you’re an established billionaire (Warren Buffet type), world-famous entertainer, model, or professional athlete (and even they’d bitch about their lives too), I don’t know of any profession that doesn’t suck balls sometimes either.
To each his own, I suppose, but I’d gladly continue eating the bullshit medicine spoon feeds me everyday than endure one more second of the type of misery I experienced growing up in the projects in Brownsville, Brooklyn.
350K in student loans, ungrateful patients, egomaniacal residents, nurses and other ancillary staff, working slave-like hours, filling out bullshit insurance forms, etc. is NOTHING (for me, at least) compared to getting your door busted in the middle of the night by cops and other assholes, having to turn a blind eye to hallway gang beat downs and rapes (yes, I said rapes), crackheads performing oral sex on cops to avoid arrest, regular beat downs while making my way to school, murders, racial profile shake downs by the cops (even while I was a goddamn undergrad!) and all sorts of other fun shit that you could only find in some of the worst neighborhoods in this country. During my 3rd and 4th years I was often puzzled by how burnt out and miserable my supervising residents and attendings were; even some of my classmates began to show signs that they too would soon crack. I'd ask myself, Isn't this what they've always wanted to do? What did they really expect out of medicine? Do they really think that working as a physician is the worst possible way you could squeeze out a living in this country? I can't even begin to understand that mentality! As I wrap up my intern year (yes, I know, many of you will say I'm still naive, practice a few years then see what happens, etc., but I started med school older than most so I was pretty damn sure of what I was getting into), I am eternally grateful everyday to be doing something that I've actually wanted to do my entire life. I would've otherwise felt like a complete and utter failure because I guess I know better.

Would be instructive to revisit Osler's great essay on this subject
http://www.medicalarchives.jhmi.edu/osler/aequessay.htm