I started my previous post, and it quickly morphed into a statement regarding the loss of a fellow medical blogger, Flea. So in the interest of re-living an all-too-short respite from healthcare, I thought I'd talk about something really important (at least while you're on vacation): fish.

Fortunately, our first day in Florida was a great day of fishing, but then came Tropical Storm Barry. With it's sustained 45-50 MPH winds, we were prevented from venturing out in the deeper water near the Gulf of Mexico over the remainder of the trip. But all was not lost. We still have fun on our first day there on the Gulf and the third day in the back waters closer to mainland Florida.

Our quarry on Day One? Atlantic Tarpon.

Tarpon, I soon learned, are a fantastic sport fish. They move to the passes between the islands between mainland Florida and the Gulf of Mexico to feed on the crab and small fish that float with the tidal currents between the islands. Weighing typically 90-200 pounds (40-90 kilos), they can put up an incredible fight, often surfacing right after consuming your bait. Landing them next to your boat often takes 45 minutes or longer (it was all catch and release). And catching them takes tenacity and determination...

... and a good guide - especially when you're a "Yankee" from Chicago.

So we set out eager to make a catch, trying for hours to catch these devils. We learned there are two ways to catch a Tarpon: jigs or live bait. Live bait was what they were biting, we were told.

Our guide was quite adept at throwing a net to catch a slew of bait fish. He stored them in the live bait wells near the stern of the boat. We would motor to the inland aspect of an island, drop our bait in the water, then ride the tidal currents out to Gulf. But despite many passes, we were skunked.

But our guide decided on another tact: catch some of those crabs floating by the boat.

So as we motored back inland, we netted several nice-sized crabs. Our guide then placed a hook through the side edge of the crab's shell, and threw them out into the current. Before long, we had our first strike! And soon each of us on the boat had the chance to fight one of these incredible fish. Here I am with one on my line: 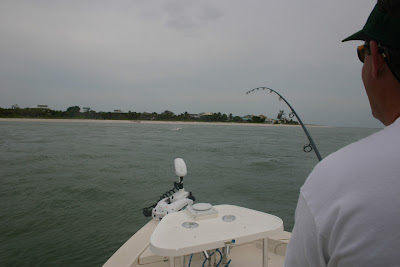 Now, if you look real close, you can see the fish leaping out of the water. I've blown up the image a bit here (you can click to enlarge, if you're so moved): 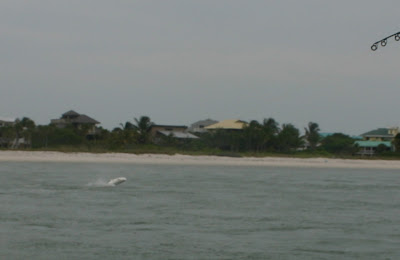 Unfortunately, after 45 minutes of fighting, a huge roiling in the water was seen at the site of my fish. A brown, smooth-skinned fish about twice its size was seen attempting to eat it: a shark. And just as quickly as I had caught it, my line was severed, and neither fish nor shark was seen again. The lack of blood in the water gave us hope my fighting fish escaped unharmed. I hope so. It was quite a spectacle to behold.

We fished in to the early evening, but then had to call it quits. Three tarpon in all were hooked. Only one shark joined in (with my fish), thankfully, and we all returned home exhausted but ready to return again for more fun.

But the next morning brought the winds and rain of Tropical Storm Barry, (the media called it "Beneficial Barry" since there was so little rain in Florida before this weekend - it figures!...) so we resigned ourselves to a few good card games, a good book, and a nice long nap. By the next afternoon, the winds were still up on the Gulf with 6-8 foot waves, so we decided to fish the backwaters. Our luck wasn't bad there either, as we caught some pretty nice snook. 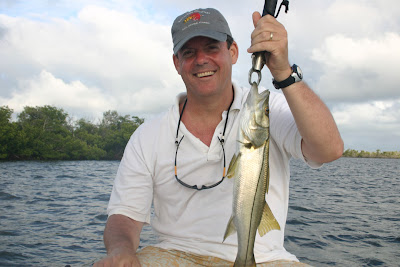 It's going to be hard to get back to work tomorrow...