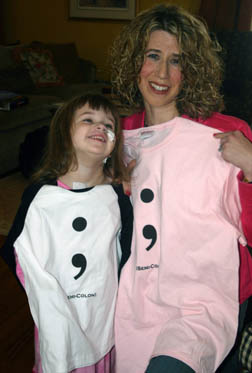 I had a wonderful opportunity to meet the wonderful mother and daughter team of Terri and 4 year old Gemma, (seen here) both of whom have Crohn's disease. Crohn's disease is one form of inflammatory bowel disease, an autoimmune disorder (where the body considers some of its own cells to be "foreign") and is thought in some cases to be linked to a genetic mutation of gene called NOD2/CARD15 and is marked by recurrent bouts of inflammation anywhere in the gastrointestinal tract. Although there is no known cure, there are lots of therapies that are effective in reducing the bouts of inflammation. It is estimated the Crohn's disease effects 500,000 people in the United States alone. They are busy advocating on behalf of folks with all forms of inflammatory bowel disease. They are seen with our "Semi-Colon" t-shirts from MedTees.com which they use to raise awareness and "bring out of the closet" the difficult issues associated with these diseases and to urge continued support of research into this disease. Importantly, they are also working to prevent cuts in research funding at the National Institute of Health, which is estimated to be reduced bu one million dollars in fiscal year 2007. Terri also participates in this Parents of Kids with Inflammatory Bowel Disease support group. Check them out, lend your support, and learn more about this illness from the Crohn's and Colitis Foundation of America.