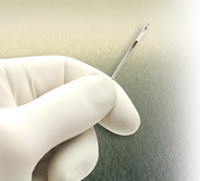 It's now been six months since Medtronic's lead recall of their 7-French Model 6949 Sprint Fidelis defibrillator lead in October 2007. The first update of the lead performance arrived in my office this week, dated 7 May 2008 (you can view it here). With this letter came the first trending data of the failure rates as determined by evaluation of Medtronic's Carelink follow-up database and Returned Product Analysis (RPA) reports as well.

While the number of lead failures remains relatively small and current follow-up recommendations have not changed, the failure trends, albeit early, remain concerning. It appears that a continued number of failures throughout the life of the lead can be expected. By Medtronic's analysis of a typical 1000-patient ICD clinic, over the next 12 months, nine (9) patients can be expected to have an anode or cathode failure and half of those patient's will have little warning of an impending fracture.

The implications of these recommendations are far-reaching, for it now seems the fault with the lead was not a physician implant technique problem as originally surmised, but rather a design flaw. Further, when it comes to replacing these patient's defibrillator batteries over the next four or five years, electrophysiologists will likely be advised to replace the 6949 lead with a more reliable defibrillator lead model, like the 6947, increasing the difficulty of a typical device battery change procedure.

An extra 1 % failure rate, on top of the risks already present in the implantation of an ICD, seems like an unusually large risk. When the wire needs to be replaced, the pateints will be older and less able to tolerate even minor surgery.

How do the other devices compare on reliability?

Dr Wes,
Do you perform lead extractions? Have you seen the Cook Evolution? We just started using it here and I've seen the laser numbers drop way down.