A 77 year old woman with a long-standing history of Crohn's colitis presents to the ER for left lower quadrant abdominal discomfort, nausea, and loose stools for a week. She denied fever, chills, syncope, lightheadedness, palpitations, or chest discomfort, but did have a "fall" three days prior to admission at home whose circumstances were unclear to her. She has a long-standing history of coronary artery disease with preserved left ventricular function and atrial fibrillation. She received an AV nodal ablation and dual-chamber permanent pacemaker implantation in 2001. She had not made her last two pacemaker clinic follow-ups "because I just felt too bad to go."

Her medications, which were not changed, included metoprolol 50 mg daily, Lasix 40 mg daily, and warfarin.

Examination demonstrated normal vital signs with the exception of an irregular pulse, and a cardiovacular examination with a fixed split second heart sound. Her abdomen demonstrated a slightly tender left lower quadrant without rebound, normal WBC count, and her stools did not contain blood. 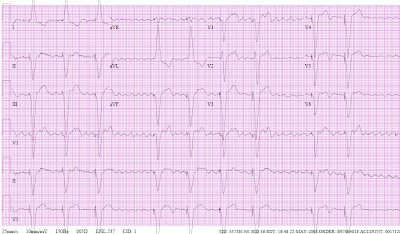 She was seen by the GI service, who felt her history and examination was most consistent with a Crohn's disease flair and began her on a Prenisone taper (40 mg daily for three days and tapering over 2 weeks until off).

Her internist wasn't sure about the EKG and asks you to evaluate her.

What do you tell him? Plan?

T wave oversensing. Reduce the sensitivity on the ventricular lead and she'll stop inhibiting and passing out.

Hmmmm. How might this finding have contributed to the patient's symptoms of abdominal pain??? (Ain't this fun?)

Hmm, I'm not sure how to relate the device malfunction to her LLQ abdominal pain. The lead could have perforated, however, when this occurs you typically see failure to capture (pacing spikes with no QRS complexes). Could the lead have perforated and be intermittently oversensing the diaphragmatic stimulation (hence the group beating with respirations)? Seems pretty unlikely. Other causes of ventricular oversensing - EMI, oversensing of atrial signals, crosstalk, lead fracture. None appear to apply here. I'm hoping that a CXR or a device interrogation will elucidate things and keep me from looking like a fool.

I am not a specialist but can't a wire break and migrate down the drain ? That would cause pain.

This EKG demonstrates evidence of oversensing by the pacemaker with subsequent inhibition of pacing (Note: there is no pacing spikes seen during the pauses on the EKG. As such, this represents a problem with sensing of the possible intrinsic ventricular activity by the pacemaker, rather than a loss of output from the pacemaker.)

Oversensing occurs when signals are received by the pacemaker that might not represent the actual ventricular depolarization. One such oversensing problem might be inappropriate sensing of both the depolarization AND repolarization of the ventricular activity, causing each heart beat to be counted twice (as in T-wave oversensing). Another common causes of oversensing include noise detected by a faulty lead (make/break connections with a broken wire) or interference by outside electromagnetic interference. If enough noise is detected, pacing output can be completely inhibited.

Newer pacing leads installed today are typically bipolar leads. That is, they each contain two wires: a central wire connected to the distal tip electrode and a surrounding wire attached to a closely spaced, yet proximal, ring electrode. Bipolar leads can sense the intrinsic rhythm between the two electrodes (bipolar sensing) or from the tip electrode back to the pacemaker can (unipolar sensing). Older leads were typically unipolar, and had a single wire that passed to the heart chamber to be paced. Sensing the intrinsic rhythm could only be performed in a unipolar (tip to pacemaker can) mode with unipolar leads. Because the distance from the tip electrode to the can in unipolar sensing is so much larger than the distance between the bipolar electrodes on a bipolar lead, unipolar leads are more susceptible to outside interference due to the larger “antennae” effect of the unipolar sensing circuit.

In the current case, the patient had bipolar leads and her chest x-ray failed to disclose a possible fracture or loose set-screw (where the lead is connected to the pulse generator can). It was noted that she occasionally had much longer pauses than those noted on her EKG, and fortunately for the patient, an occasional ventricular escape rhythm of 30 was noted intermittently. Interestingly, when this occurred, she noted mild nausea and abdominal discomfort, possibly from poor perfusion to her gut. She did not, however, complain of lightheadedness. Interrogation of her pacemaker disclosed the following intracardiac electrogram signals. The marker channel (with VS meaning “ventricular sensing” and “VR” designates a sensed ventricular signal in the refractory period after a sensed ventricular beat) is seen. “VP” means “Ventricular Pacing” as well. The bottom line represents the actual signal (intracardiac electrogram) detected by the pacemaker.

Note that with the pacemaker programmed to bipolar sensing (left side of the image), significant noise is detected by the device (many VSs and VRs noted on the marker channel) and inhibits pacing completely. A larger ventricular escape rhythm at about 30 is also seen superimposed on the noise. On the right of the image, the patient’s ventricular sensing was reprogrammed to unipolar mode (to exclude the contribution of sensing from the outer wire – which, incidentally, was fractured) and appropriate exclusion of the noise from the sensing occurs with resumption of appropriate ventricular pacing Her abdominal pain resolved with reprogramming and she was tapered quickly off of steroids. A lead revision was scheduled to replace her faulty ventricular lead was scheduled.

Very interesting. Although of no immediate relevance to the patient's problem I would have asked the internist "with hope of achievement and maintanance of sinus rhythm presumably abandoned, why a dual chamber pacer following AV node ablation?"

This pt had paroxysmal atrial fibrillation at the time of the initial AVJ ablation/pacer in 2001 (hence why the atrial lead was necessary) which became chronic as the years progressed.

Without knowing the underlying pacing mode and some other data (make, model of device, programmed rate) it is not possible to do anything but guess, however I agree it is oversensing on the ventricular channel. You say the pt was implanted with a bipolar lead. My guess is that you have an insulation failure and the resultant interference caused by an intermittentint connection between the two conductors results in intermittent oversensing. This is one instance where reprogramming to unipolar might reslove the problem, at least for the short term. Confirmation can be found by looking at the lead impedance in bipolar and then checking it again with the device re-programmed to unitpolar. Normal impedances are typically 300-1000 ohms. Something less than 250 ohms in bipolar would likely confirm my hypothesis.