The AHA and Medical Fear Mongering

If you have a pacemaker or implantable cardiac defibrillator, slipping an iPod into your shirt pocket, or walking past anti-theft equipment at the mall, could make your device go haywire - true or false?

This is the second question of a quiz (available online) from the August 2007 Heart Insight magazine, an official publication of the American Heart Association (AHA) published quarterly by Wolters Kluwer Health, a division if Lippincott Willliams & Wilkins publishers. It is a slick, glossy publication and was being offered for free to our patients: 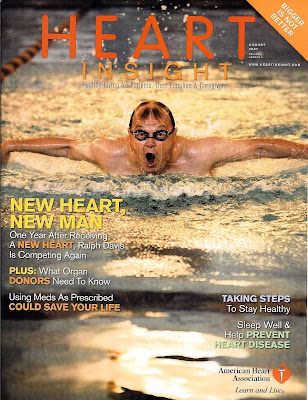 So today, a patient left this for me on my desk: 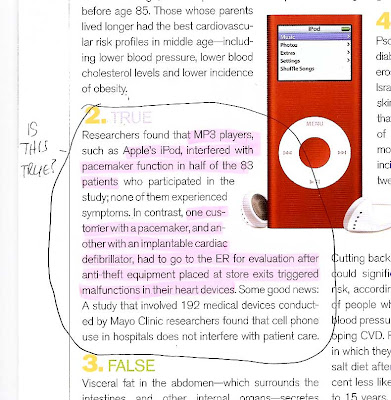 It is the "answer" to the above question that appeared in their journal, circled by a patient with the question penciled beside it, "Is this true?"

Now on the surface, such a quiz seems innocent enough. After all, it's meant to inform. But look what it has done to one of my patients. THe patient is asking, Could this happen to me?" This person is concerned. Scared. Fearful.

This how our own AHA wants to get their message across, I guess.

But when one really looks at the information provided in the answer to the question, we find the real answer in amongst the confusing array of sound bites:

"Researchers found that MP3 players such as Apple's iPod, interfered with pacemaker function in half of the 83 patients who participated in the study; none of them experienced symptoms."

So there you have it. None of them experienced symptoms and, by the way, none of the patient's devices went "haywire."

The supporting study (actually a case report) pertaining to the first part of this answer appeared in the peer-reviewed journal Heart Journal in June 2007. This case study studied the interference of an iPod held within two inches of pacemakers. It found very minor, non-lethal interference (usually undersensing of the patient's intrinsic heart rhythm) in most cases. No patient was harmed. In fact, no patient was tested with the device in their shirt pocket. From the article:

In our patient, oversensing did not result in pacemaker inhibition or noise reversion; it was evidenced only by pacemaker interrogation that showed high atrial or ventricular rates on rate histograms. This may lead the physician to conclude that the patient had experienced atrial fibrillation (Figure 4) or ventricular tachycardia (Figure 2) and result in unnecessary antiarrhythmic drug therapy or electrophysiologic investigations. These high rates also may be misinterpreted as suggesting loose set screws or intermittent lead fracture and may lead to unnecessary interventions. Interference caused by iPods appears to be reproducible from day to day, but whether repeated applications have a cumulative effect on rate histograms is not known.

We performed testing by applying the iPod approximately 2 inches above the pacemaker. This may appear to be somewhat artificial but is, in fact, quite realistic because iPod devices often are carried on an armband or in a shirt pocket during use. If the iPod is placed in an ipsilateral shirt pocket, it certainly may be close enough to cause interference. Furthermore, electromagnetic signals emitted by handheld devices probably are of low power, and the strength of the signal falls dramatically over distance. However, because iPod devices may be carried close to the pacemaker, there may be a potential for clinically significant interference.

Also, the article did not study ANYTHING about the interference of electronic surveillance systems in malls with pacemakers or defibrillators. But rather than be true to their readers (our patients), it seems the AHA had to add the bit more fear-factor by citing rare case studies (see references 1 and 2 below) where patients had to go to ER's for "malfunctions of the heart devices," even though other studies, while acknowledging that interference can occur, actually demonstrated the safety of patients walking through electronic surveillance systems with defibrillators. Once again, no devices went "haywire" but rather responded appropriately to the noise detected by the device.

So why does our own American Heart Association, in its new "official" publication, condone such fear mongering of our patients, even when their own website claims minimal risk to patients in these settings. What benefit does this serve? Is this medical marketing tactic in our patients' best interest? Shouldn't the AHA provide more journalistic oversight than appears on the Today Show?

Or is the sensationalist content more important to their egos?

Love your posts! Great example of "associations" using scare tactics--I think to bring attention to themselves and generate and justify more dollars in their budget.

speaking as a young adult with a pacemaker (complete heart block as a complication of open heart surgery), one of my sisters pointed this out to me when she came across it on cnn about a month ago. it (i think) rightfully scared me. once i started getting used to having my pacemaker i decided that i was going to make sure to control the things that i can control and do my best to not worry about those which are out of my control. i am on a crowded el most days with ipods everywhere- and my own is usually in my pocket. as a person whose ventricles have not beat on their own in well over a year, things like this are really a matter of life and death and i take them seriously. that next train ride surrounded by ipods, i wondered to myself if i really should be there. on my next visit to see my pacemaker nurse she of course set me straight and told me there was no need to worry. after my pacemaker was implanted i was sent a guide to living with a pacemaker from guidant in the mail, which was very light on actual information. before i had received this letter the only thing i knew i needed to avoid was mri's. i feel the healthcare that i receive is first rate but there does not seem to be a patient education component to learning to live with your new device to compliment it.

either way i read your blog from time to time and enjoy reading about issues of rhythm and the heart- thanks.

I would think logic would dictate that a device like a cell phone should is MUCH more likely to affect pacemakers since they actively transmit (not just bleed RF emissions). you should see my iPhone (which i LOVE LOVE LOVE), the thing not only does the wi-fi and GSM wireless function properly (meaning transmitting) but the thing bleeds all over the near RF spectrum (ask my TV or speakers, its nuts). oops, i've gotta stop typing, my heart just stopped... just kidding.