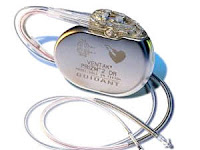 Boston Scientific, still reeling from the burden of over well over 1000 product laibility suits over its acquired Guidant implantable defibrillator portfolio, has successfully leaked that they are in the process of settling 1,350 of the cases:

...people familiar with the matter said Boston Scientific, of Natick, Mass., is in talks to settle 1,350 product-liability lawsuits it inherited when it purchased Guidant Corp. last year. The suits allege that Guidant negligently sold several models of implantable defibrillators after learning of defects in the devices that caused them to fail.

In a recent filing with the Securities and Exchange Commission, Boston Scientific reported that it raised the sum it had set aside for potential damages in the case to $732 million, from $485 million at the end of 2006. A spokesman for Boston Scientific said the company was "committed to an aggressive defense."

Previous talks in September between the company and plaintiffs reached no resolution. This week's talks come on the eve of a hearing tomorrow in U.S. District Court in Minneapolis on patients' efforts to seek punitive damages from the company.

Could Medtronic be next?