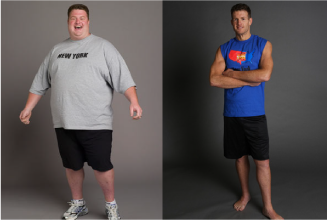 Before and After: Erik
Winner of last seasons' The Biggest Loser competition
Spring is in the air, and soon many of us will be heading for the great outdoors – especially the beach. But the winter months have taken their toll. Some might say “some settling of contents has occurred during shipment and handling…”

So to counteract the scourge of winter on our bodies, one of our doctors proposed we start our own Biggest Loser competition.

For those of you not familiar with The Biggest Loser, it has aired on NBC and showcases a number of individuals, all trying to lose the most weight. Like all reality TV shows, it’s definitely “made for TV” with plenty of anecdotes about dieting and exercise, but it’s become a phenomenon nonetheless.

So the members of our Electrophysiology section decided to have our own rendition of the same contest.

Last Monday, we all stepped on a scale and recorded our weight in scrubs only (no shoes). Each contestant will contribute $20 to the prize money. We have 15 people giving it their best shot over 12 weeks. At the end of that time, we'll record who’s the biggest loser in body weight based on a percentage of their starting weight. The winner will receive the money in the pot. We’ll also total up the total number of pounds lost as a group.

Think about this for your workplace. It might be the best thing you ever did as a team and for your health…

Email ThisBlogThis!Share to TwitterShare to FacebookShare to Pinterest
Labels: obesity

We did that at a company I used to work for---and the only guy who entered (among a gaggle of nurses) won...waaaah!

Congratulations. You've been tagged! Check out my blog for details.