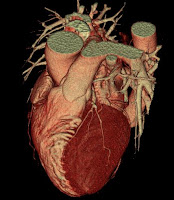 Today a single-center, prospective study from Israel was published that evaluated higher-resolution 64-slice multi-detector computed tomography (CT) scanning (MDCT) in patients with chest pain presenting to the Emergency Department. The study, published on-line in the journal Circulation, prospectively studied 58 patients with chest pain and no EKG or chemical evidence of cardiac injury that received MDCT scans to evaluate their coronary anatomy. 15 patients were classified as normal, 20 had mild, non-specific disease and 23 had significant coronary blockage (defined as greater than 50% occlusion) in at least one artery. The study demonstrated that MDCT had a 100% negative predictive value and 100% sensitivity (20/20) with a 92% specificity (32/38 patients) for a positive predictive value of 87% (20/23). Importantly, the study followed patients for 15 months after their ER discharge, and no deaths or heart attacks (myocardial infarctions) occurred in any of the 35 patients discharged from the Emergency Department after initial triage and MDCT. One patient had a late coronary intervention at 13 months after discharge of a distal circumflex coronary artery.

The study was limited by its relatively small size and its single-center experience. Additionally, patients with irregular heart rhythms (atrial fibrillation or frequent premature ventricular contractions) or rapid heart rate (>90 beats/min) were excluded.

Nonetheless, the potential for these scans to have a major impact on ER decision making, especially in patients with other equivocal risk factors and testing, is significant. Cost-effectiveness data are still needed, but the potential for limiting expensive cardiac admissions might be found to be cost-effective in the long run. It likely won’t be long before these scanners become standard equipment in Emergency Departments across the country – patients will demand it.

But there’s still one big barrier to implementation: we still have to secure insurance reimbursement for them… You can bet the Big Boys (like GE and Phillips) will be working on this...

Who will be reading these? Radiologists or Cardiologists?

I suspect radiologists will read these from the ER most of the time - that is, of course, assuming the cardiologist does not order the test (in that case they may insist on reading their own scan). Radiologists already care covering the ER's for all kinds of injuries (head CT's, plain films, etc.). But don't rule out cardiologists reading these in their offices, too. It's just a matter of time before these scanners migrate there as well.