How Clinical Guidelines Are Mirroring the Tax Code 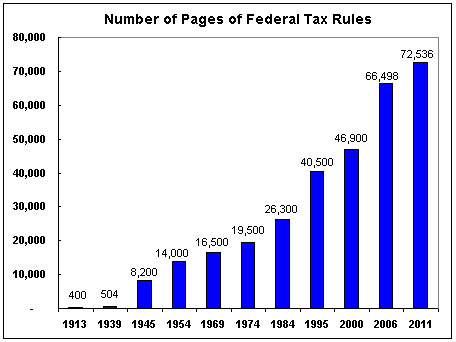 The above graph from the Cato Institute demonstrates the growing complexity of the U.S. tax code over the years. After doing my taxes recently and trying to track the ins and outs of the law for my wife's private practice, I can attest to the graph's accuracy.

But then I was reading an interesting editorial in Circulation: Arrhythmia and Electrophysiology by N.A. Mark Estes III, MD and Jonathan Weinstock, MD that reviewed an article by Roos, et al in the same journal that found only 27 of 698 guideline recommendations from the European Society of Cardiology (median 1.2% per guideline [IQR 0.95% to 3.7%]) were correctly referenced as Class I or III Level of Evidence A recommendations, calling into question the accuracy of guideline recommendations. In their editorial, Estes and Weinstock defended the guideline process but also mentioned the following shocking statistic:

There have been 2413 guidelines published by 267 organizations over the last 2 decades.

To bolster their point, they referenced the government's own website designed to tract these guidelines.

So I checked the number of guidelines so far just for cardiovascular diseases: 457 and counting.

Given this, one thing is becoming abundantly clear:

Email ThisBlogThis!Share to TwitterShare to FacebookShare to Pinterest
Labels: guidelines

Cato's chart would be a lot more useful if they did it by pages over US population. Just because something grows does not make it good or bad per se.