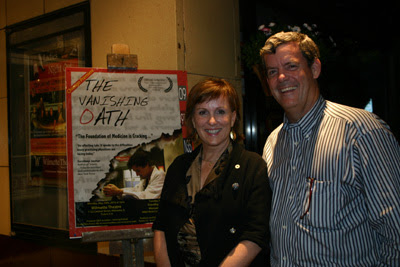 I would like to take a moment to thank the over 120 people who took time out from their busy schedules to attend the Chicago premiere of The Vanishing Oath at the Wilmette Theatre last evening. For many, it was the first time people they were exposed to the challenges that confront physicians daily in our current health care system.

Following the film, the audience (comprised of approximately 65% non-physicians) participated in a question and answer session with film's producer, Ms. Nancy Pando (pictured here with me following the show). The critiques and comments were invaluable to the film team as they work to engage more people in the efforts underway to protect the doctor-patient relationship. Working with Ms. Pando, I hope to assemble a short video clip of a few of people's impressions about the film in the days ahead.

For those interested, there will be a second showing of the film on the south side of Chicago tonight at the the Dorothy Menker Theatre, Moraine Valley Community College, 9000 West College Parkway, Palos Hills, IL from 7-9pm. Both Ms. Pando and the film's director, Ryan Flesher, MD, will be attending.