There can be no denying that the highlight of the Boston Atrial Fibrillation Symposium was the lively debate between Andrea Natale, MD and Carlo Pappone, MD. It was a spirited affair between the soft and the stiff - catheters that is - of the Sterotaxis robotic system vs. Hansen Medical's system. Pappone argued that Hansen was not safe due to its stiffness. Natale countered that it is safer than conventional techniques. Pappone said "I don't believe you." Natale related Pappone's data to a little boy who though he saw a Ferrai because he saw a white horse on a red car as his father had mentioned. At least until he showed him the picture of what he had seen: 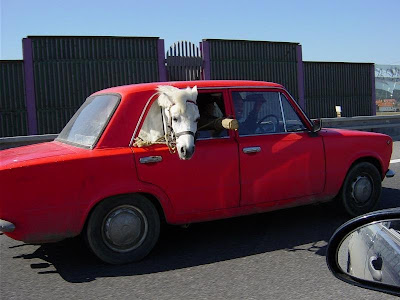 To which Pappone countered that after hearing Natale tell this story so often that he decided to have a real Ferrari made to order, custom, and had Natale's name imprinted on it.

Both seemed happy with their good-hearted performance.

But the winner of the debate between the two came from an audience member who, after sitting throught the many earlier sessions devoted to tackling afib ablation, asked the pointed question: "Can either of the robotic systems accommodate a cryo balloon or multi-electrode catheter to evaluate for CFE's (continuous fractionated electrograms)?"

The room was briefly silent. The audience knew the importance of this question, particularly since no one is fooling them selves any longer just how demanding (physically and emotionally) these procedures can be for the operator. The audience was looking for a means to make these procedures not safer, but more effective on the first attempt, and they had heard promising news on other technical fronts.

Natale and Pappone had to admit that neither robotic system could not accommodate these other catheters.

And suddenly, the both robotic systems started to look a little rusty.

Multi-electrode catheters and cryo catheters by themselves don't necessarily get us high efficacy the first attempt either so perhaps the silence of the audience reflects the sense of "what's the point?"

I heard the more exciting portion of the debate was Dr. Pappone's rebuttal of Dr. Natale, who claimed that the Sensei system was safe, despite the patient death and several injuries reported to date....

I think several in attendance were surprised at Natale's behavior, especially since he had the same criticisms of the Sensei at HRS 2008. The Sensei is simply an awful piece of of equipment for safety, especially in low volume/non centers of excellence.

Indeed, the Sensei surely will be rusty soon enough. The Niobe may have better prospects--will need more data on the irrigated catheters.

That HNSN's Sensei is unsafe and therefore not usable - I would agree. But if you claim that the STXS Niobe is already obsolete, then one would have to ask the question why so many top institutions around the world keep buying and using this equipment. Seems also that the STXS-Niobe is able to automatically make 3-D ECG-maps, so multi-ECG-electodes do not seem to be essential. And the STXS-Niobe is perfectly usable without Cryocatheters. Maybe Cryocatheters could also be adapted to the STXS-equipment if need arises.

This so called debate is just a replay of the HRS presentation last May with a few newer slides. The scientific sessions were much more interesting although it is interesting to see the Germans building enthusiasm for the Niobe, particularly Hendricks at Leipzig and Kuck at Hamburg.

Refer to the investorvillage.com board (stxs) for an alternate perspective. See Pappone vs Natale debate.

Dr. Wes, As a patient on meds and contemplating ablation, I would appreciate your survey of the latest available data comparing the 2.