She was in her 80's and new to our system, a grandmother from a land far away. She spoke no English at all but was able to communicate through her daughter who accompanied her. She was brought to the Emergency Room by ambulance, after her daughter had noticed her complaining of shortness of breath and dizziness since last evening. The ambulance crew noted her pulse was very low and the EKG disclosed the following: 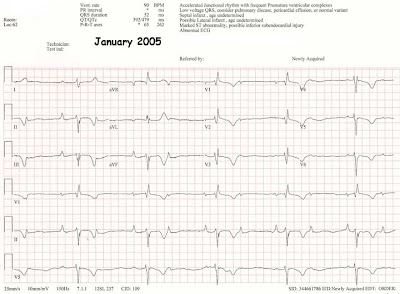 I was called to evaluate her. She was lying in bed, at approximately forty-five degrees, was tachypneic but conversant with her daughter. She had a history of heart failure, and had been admitted to the hospital on four different occassions in the past 6 months. Her physical exam demonstrated a normal BP of 130/56, pulse of 38 beats/minute, respirations of 24/minute and cannon A waves in her neck and an interesting exam finding that was also noted on chest xray: 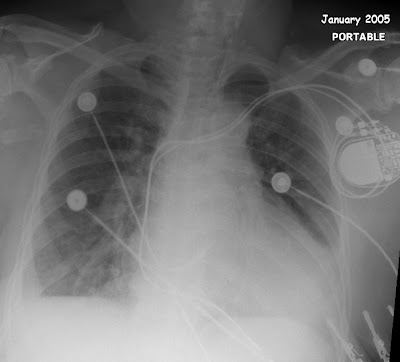 Her EKG's from the four prior admissions for heart failure exacerbation looked similar, and demonstrated a characteristic that was missed by multiple attendings, echo technicians, residents and medical students from each of her last four admissions: 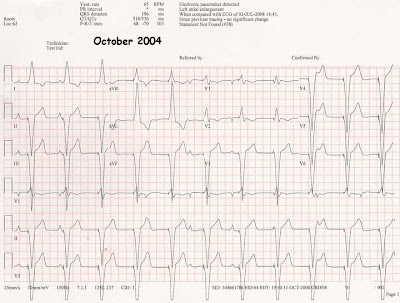 So, what was not appreciated?

Email ThisBlogThis!Share to TwitterShare to FacebookShare to Pinterest
Labels: EKG

OK. Can I attempt this as a non cardiologist?

The 2005 EKG looks like complete heart block. So that accounts for the cannon waves. But she has a pacemaker and with the rate so slow it cannot be working. Now there are two wires from the box. Presumably one should be in the atrium and the other in the ventricle. So the idea I would think is to get the atria and the ventricles working in sequence. But it does not look like they were in 2004. So is that atrial wire misplaced?

And did she have signs of consolidation? Is that an air bronchogram I see?

The P waves and QRS complexes each march out separately, seen more easily on the 2005 tracing because of the slower rate. In 2004 more of the P waves were hidden within the widened QRS or T waves.

I also see what looks like an air bronchogram on the left, but not sure how that relates to her AVD.

(Best seen on the V1 rhythm strip, fourth line on the tracing.)

Oh, and Wes: You owe me a new LCD monitor. This one was ruined by the calipers.

Hmm. Tough one. I'll be the contrarian and say that the 05 ECG shows Mobitz Type 2 (though the PR is not constant, so it probably is third degree). Obviously there's a complete failure of the pacemaker to capture. The Ventricular lead in the CXR looks like it's going into the stomach, and I think I see air in the upper left mediastinum. That could account for failure to capture (haha!).

Looking at 2004, I notice that the atria are not paced, despite the fact that some beats are dropped, which also makes me wonder about lead placement.

To keep it interesting, it might be helpful to see an even older EKG, like this one.

right bundle branch block morphology suggesting ventricular lead is misplaced. interesting though because the leads are on the (patient's) right of the spine. that usually means venous rather than arterial access. so to get to left ventricle suggests either asd or vsd. i'm guesssing the physican exam sign is some kind or murmur associated with asd or vsd

i can't see well enough to see whether the 2005 is complete heart block or 2:1. either way something is wrong with the pacemaker, it has to be able to see p waves after the t wave and is not responding. i'm kind of stumped. i don't see any ventricular pacing spikes on the 2005 ekg. i would imagine even if the lead dislodged you would get some spikes, but i could be wrong?

The R-R intervals on the EKG are constant despite the changing PR segments. This looks like complete heart block.

This raises the interesting questions of whether or not she has a septum primum defect. The chest xray shows the atrial lead further to the patients left than usual. Either it is the RV outflow tract, there is a huge right atrium or the has crossed the primum atrial septal defect to the left atrium. I suspect the patient has primum ASD.

As another poster mentioned above, there is a right bundle branch paced morphology. The ventricular lead by be crossing the ASD and entering the left ventricle.

Although I only hope that when I think I am looking at a zebra, it isn't in a field of horses.

Upon presentation, physical examination on this woman disclosed a small incision parallel and slightly inferior to her left clavicle. Palpation confirmed what was suspected, a pacemaker had been implanted. Her initial EKG, however, demonstrated complete heart block with a ventricular escape rhythm and very large P waves suggestive of right atrial enlargement. Chest x-ray confirmed that a dual chamber system (a lead in the atrium and ventricle) has been placed, as well as cardiomegaly and vascular congestion. After asking the patient and her family about this, she had had her pacemaker implanted in 1997. but had never had the device checked afterward. This, then, was a very fortunate lady who had survived pacemaker battery depletion because of an intrinsic ventricular escape rhythm.

What was not appreciated during the patient’s four prior admissions was the fact that she was pacing asynchronously between atrium and ventricle at a rate of 65 beats per minute despite having a dual-chamber pacemaker system.

Careful examination of her chest x-ray (not seen well with the resolution of the image I show), was a small radiographic marker in the header of the pacemaker that reveals the pacemaker was manufactured by Medtronic, Inc. Nearly all of Medtronic’s dual chamber pacemakers revert to VVI mode at 65 as their elective replacement indicator when the battery nears depletion. All pacemakers have some indicator of low battery state: some pace only 10 beats per minute slower than the programmed rate, some change modes from DDD (dual chamber pacing) to VVI (single chamber, ventricular pacing) and pace at a fixed rate, some stretch out their AV delay, etc. – the indicator is specific to the manufacturer – but this “elective replacement indicator” heralding a low battery state is an integral feature to all pacemakers on the market today.

The loss of AV synchrony in this patient likely contributed to the exacerbation of her heart failure symptoms, but was not recognized my multiple caregivers despite four separate admissions for heart failure between March and October 2004. The pacemaker battery eventually depleted in January, 2005, prompting her urgent presentation to our Emergency Room (hence why no pacing spikes are seen on the initial EKG).

#1 Dino - Sorry about your monitor.