This week, Dr. Luigi Di Biase and his colleagues from the Cleveland Clinic reported in the Journal of the American College of Cardiology their early results of magnetic navigation to aid catheter ablation of atrial fibrillation in 45 patients during pulmonary vein isolation procedures. The results were poor at best, especially for the near $2 million dollar price of the technology.

Marketed by Stereotaxis as a safe and effective means for performing atrial fibrillation procedures, magnetic navigation was able to negotiate catheters to appropriate locations, but the technology, with its current generation of specially-designed floppy magnetic ablation catheters, failed to adequately electrically isolate the pulmonary veins (except in one patient) and had a significant 33% incidence of char formation on the conventional temperature-controlled (non-irrigated) ablation catheter tip. 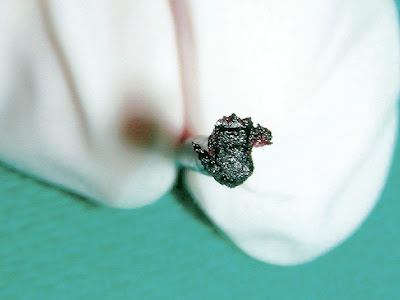 From the article: Char found on the ablation catheter tip after an ablation lesion.

Whether the system will be able to perform better with irrigated-tip ablation catheters under development with Biosense-Webster remains to be seen. For now, based on this report, the use of conventional temperature-controlled catheter ablation with the magnetic navigation system appears to add no benefit to the more conventional atrial fibrillation ablation procedures.