Sorry about the delay, but unlike most of the EKG Du Jour series of EKG's, I elected to make a separate post to explain the interesting tracings that first appeared here.

As a refresher, the original 12-lead rhythm strip obtained on this healthy, asymptomatic individual looked like this when he presented for evaluation of two near syncopal spells: 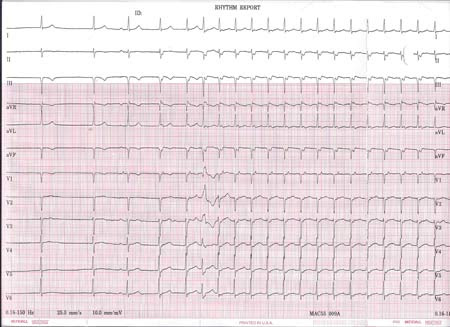 The first two beats do not appear to be preceded by a P wave but have a relatively narrow QRS complex associated with them, suggesting an AV junctional origin to the patient's rhythm. It is possible this man suffers from sick sinus syndrome or has a sinus rate that is slower than his junctional rate while at rest.

The third beat is where things get interesting. Here, a P wave is clearly seen that conducts to the ventricle with a normal PR interval. What is unsual, however, is the finding that the fourth beat (that appears to be junctional) occurs earlier than one would expect than a junctional escape beat to occur (based on the earlier two junctional beats). In effect, this fourth beat appears "pulled in" earlier to the preceding beat, but also has a clearly visible retrogradely-conducted P wave (best seen in V1) that occurs immediately after the QRS complex. At this point, the patient is in a supraventricular tachycardia that accelerates slightly with the fifth beat occurring earlier - probably because of hemodynamic alterations that occur due to the unusual cardiac activation sequence (slightly decreased BP and increased catecholamine level).

The very last beat of the tracing defines the end of the run of supraventricular tachycardia.

So how did the tachycardia initiate?

This is an example of a normal P wave initiating SVT due to AV nodal "double-fire." That is, a single atrial beat conducts down BOTH the fast and slow pathway of the AV node. In this case, typical AV nodal reentrant tachycardia was initiated by a single sinus beat in this gentleman.

Here is the above tracing explained using a favorite of EP's -- a ladder diagram: 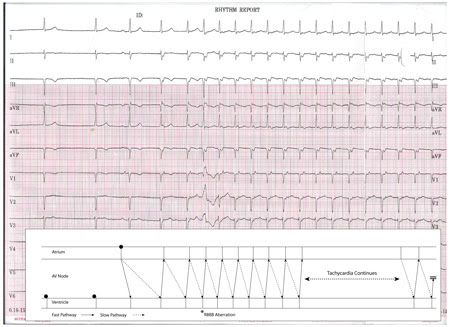 To fix this problem, an EP study with slow pathway ablation should be performed with evaluation of the patient's residual sinus node function after the slow pathway is ablated. If his sinus node recover time remains sluggish after the ablation, then (and likely only then) should a permanent pacemaker be implanted.

Very interesting; the fact that the P wave was the initiator of the SVT had me focused on atrial conduction travelling along either the fast OR the slow pathway, but not both.... sleight of hand, I tell you!!! This was a great one

I happened upon your blog when I googled biventricular pacing. I am new to the world of EKG's (working in a telemetry unit) and this is amazing! Thank you for the education, even though I am still puzzled about a case of v pacing in the 70's(underlying atrial flutter) with a 11 second 17 beat run of WQRS/biventricular pacing. I am going to keep coming back here, very interesting!!!!