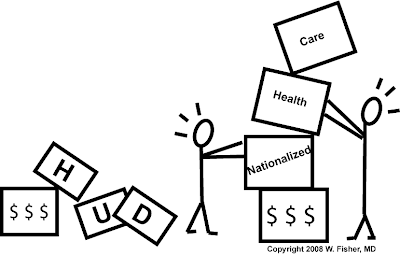 I picked up the New York Times this morning and saw the front page story entitled "Building Flawed American Dreams" and expected to find a story about American health care. Instead, I found it was really a front page story about Henry Cisneros and his involvement in the backroom-dealings of the housing industry - the subprime mortgage deals that led to our current economic crisis. The story chronicles the myriad of regulators, financial institutions, and cronyism that created this crisis, unfettered by transparency, free market competition or disinterested oversight. Somehow, I couldn't help but think that the story was about health care after all.

Because the parallels to our proposed health care system of the future are, I'm afraid to say, remarkably similar:

Homeownership has deep roots in the American soul. But until recently getting a mortgage was a challenge for low-income families.

Homeownership's roots in our soul pales in comparison to our own health care needs. Additionally. many families can no longer afford health care, or even the insurance policies that are supposed to be our saviour. "What do you mean we can't have health care for all? Of course we must! It is our moral imperative!" This is emotional manipulation - appealing to our most primal fears -a roof over our heads is primal, mortality more so.

So we stand on this slippery slope.

We've gotten to the point where even our own presidential candidates have espoused health care as a "right" for every American. As we consider this entitlement, we must now ask ourselves how, exactly, the government will implement this initiative to make healthcare a "right." Can the government really supply the facilities, the doctors, the finances to make this happen? Or will they, like the housing industry, turn to private corporations to lead the charge? Who will get the contracts? What special legislation will be enacted to make it happen? Importantly, what business deals will be struck? What back-room deals and shennanigans will be cooked to make this impossible-to-finance system continue? Or will the parallels be as Mr. Cisneros said:

"I'm not sure you can regulate when we're talking about an entire nation of 300 million people and this behavior becomes viral."

"Health care for all" has already become "viral." The entitlement attitude for affordable health care has become the cornerstone of healthcare policy in America. So can we expect to regulate a bloated system of bureaucracy that, like the housing industry, has its own set of self-interested parties?

If the housing crisis is any indication, I doubt it. The HUD-insured subprime mortgage party lasted through both the Clinton and most of the Bush administration. The private and public organizations that fed at the government trough have taken their money elsewhere. Or perhaps they are waiting in the wings for nationalized health care - follow the money. When will we ever learn?

And when the propped up government funded health-care system fails, then what happens?

Health care is a right, but that doesn't necessarily mean it should be free or cheap. In other countries, for example, here in Germany, people pay a pretty penny for their health insurance every month. When you are sick, you are taken care of. If all citizens pay into a system their entire working lives, then when they do indeed become very ill, the system is there for them. My husband, a German, has Parkinson, has had two strokes,a heart attack and now has a defillabrator. His doctors tell him outright: you have paid into this system your life long, now it's pay back time. His treatment is excellent and we don't have to worry about paying out of pocket or selling off our house because of it. In the end you pay for what you get.

Agree with above poster. I just posted over at KevinMD the same sentiments. No one is saying that Medicare for all should be free, just that we should be able to purchase as a choice. Personally, I'd chose it in heartbeat for my families coverage. It provides the best insurance with the least aggravation for consumers. Given the choice of $5000 per year (McCain's numbers) for commercial insurance or $5000 per year for Medicare, I'd choose Medicare.

however our military is substantially more expensive per taxpayer than any European country, so we need to decide where to spend the money. also can you sue for millions of dollars if you were unhappy with the medical care he received, because that's the deal in the us so we will see what actually happens.

No people cannot sue their doctors here in Germany for millions. They can file complaints or even bring charges, but the reasons have to be serious ones. The courts may award money, but it is a reasonable amount, hardly ever a million. The idea isn't to make money because of a doctor's mistake, unless the patient can no longer work, but to make sure such a mistake doesn't happen all to often. The first step is often to bring the complaint to one or another of the doctors' organization and let peer review settle the matter. What doctors here do not want is the American way of suing to get started here.

Geez, Germany's got their act together a lot better than the U.S. has. But if we tried your system, certain people would complain that it's socialism. (Which is evil)

If you enjoy marginal tax rates in excess of 60%, then universal healthcare is for you. Paying for it is the issue--I think everyone has a right to healthcare as long as they can afford it. Otherwise, you don't have a right to it, and claiming that you do is in a sense assuming that you have a right to someone else's property (tax dollars) and time (the doctor's) because you need it. In that case, I think I need your car, so hand over your keys.